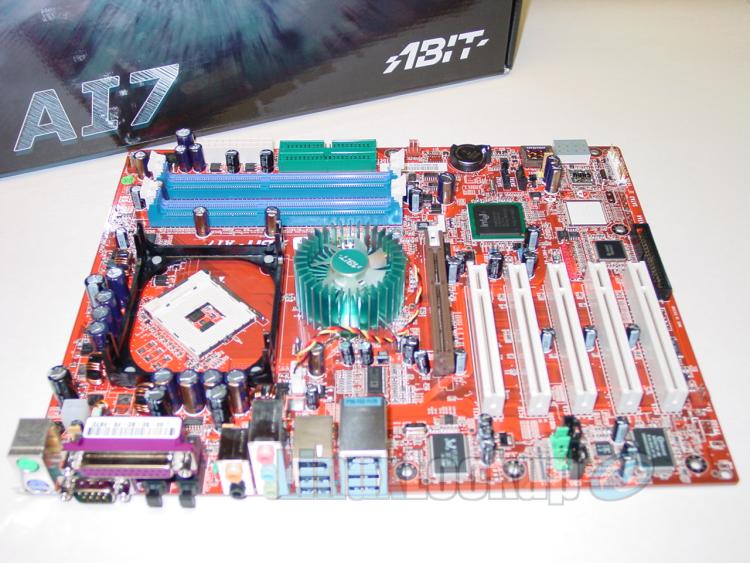 The AI7 is one of Abit's latest motherboards to introduce an innovative new set of features dubbed 'uGuru'. uGuru is Abit's own on-board processor that allows real-time monitoring and tweaking of the motherboard in Windows.

The idea behind uGuru sounds great, but is Windows based so all you Linux users will have little or no use for this function. This board uses an Intel i865 Chipset which is a cost effective sibling of the high-speed and expensive Intel i875 chipset. Consumers shouldn’t sweat it though. Performance between both Chipsets are very similar, the i865 has a smaller price tag still supporting Intel’s 800MHz FSB Northwood (with Hyper Threading Technology) and even its upcoming Prescott processors. Abit offers two versions of the AI7 motherboard. The Abit AI7 is the standard model while Abit AI7-G comes with Gigabit LAN support and an additional Serial ATA controller.

One ABIT AI7 motherboard One 40-pin, 80-conductor IDE cable One CD containing the required drivers and utilities One floppy drive cable One USB 2.0 and IEEE-1394 cable with bracket One I/O shield One Serial ATA cable One Serial ATA power cable converter One User Manual One Quick Guide One Quick Installation Guide The board is packaged in a typical Abit fashion but sports a new aesthetic look. This new look is much more simplistic and clean. No more logos and branding from other community sites, it’s all Abit now. It appears the included documentation has also under gone some changes as well. It is more accommodating to the English language, packed with illustrations going into greater detail and also comes with a quick start guide.

Placement of the CPU socket has been rotated 45 degrees, making it much easier to work with during installation. But I’m sure Abit engineers had more than accessibility on their minds. This positioning offers better air flow around bulky Northbridge heatsinks and free from capacitors.

The AI7 has four DIMM slots which support DDR 266/333/400 and operates in either single channel or dual channel mode. The memory slots are grouped in two color-coded slots allowing for easy identification and setup of dual channel mode. Each slot supports up to 1GB of memory, that’s up to 4GB of memory in total. Overall connectors are well placed, with the exception of the floppy connector which is right at the bottom of the board.

Just your standard AGP 8X/4X slots. The Intel chipset supports up to six PCI slots but the AI7 only comes with five. Reason being Abit has decided to use up the space to allow better placement of the AGP slot on the board. Having the AGP slot lower makes for better access to memory modules, and in my opinion was a very wise decision.

I was surprised to see the AI7 has a POST (Power On Self Test) code display LED. It is used to check the status of components and peripherals, indicating if an issue is present with an alpha numeric post code. These post codes can be cross referenced in the manual for basic trouble shooting and description of the problem.

The back panel of the board is a Swiss army knife of ports and sockets with an optical S/PDIF-In and Out, four USB 2.0 connectors, a six pin FireWire connector, an RJ45 LAN connector, PS/2 keyboard and mouse ports, printer and COM ports and five audio jacks for 5.1 sound. If you require more USB or FireWire ports there is a bracket included which is easily connected to an internal controller. Boasting a total of eight USB 2.0 and three FireWire ports.

The AI7 most certainly is a stable motherboard with all the bells and whistles. But as a Linux user, you may be missing out on the strengths the uGuru processor real-time monitoring and tweaking. Abit EQ, Fan EQ, OC Guru, Audio EQ, FlashMenu and BlackBox are all features controlled by the Windows based software. Including the ability to apply your settings on with fly by pressing F8 (no reboot required).

Countless BIOS options give the AI7 a lot of over clocking possibilities, allowing you to manually adjust the FSB and AGP/PCI bus speeds in small increments. You can also adjust the CPU, AGP VDDQ and DDR voltages, for an unparalleled level of control over your hardware. Though we found this board to be rock solid and feature enriched, this may not be the best motherboard for the Linux user, more so the Windows community. 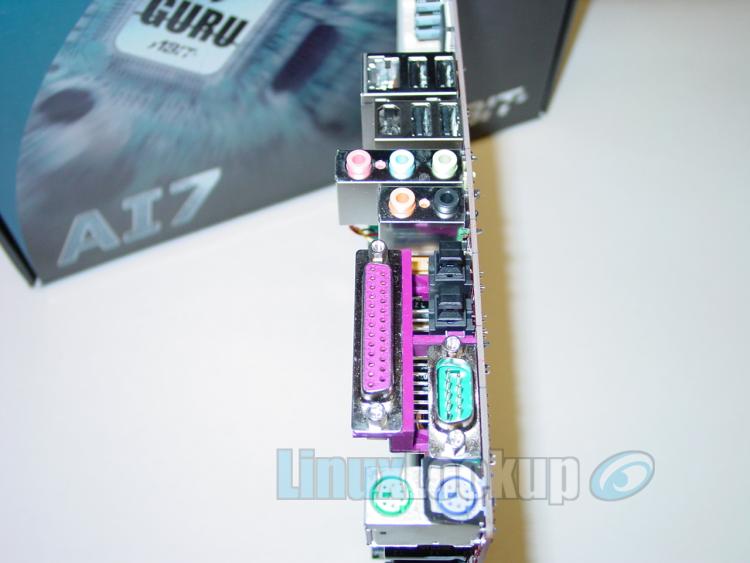 Great board but geared more towards Windows users.