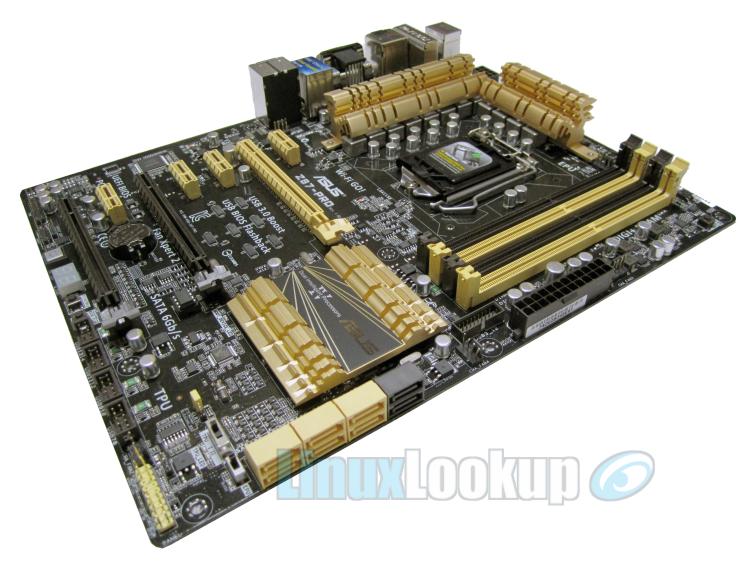 Representing mainstream motherboards based on the Intel Z87 chipset, the Z87-Pro is an ATX form-factor board reflecting ASUS’ commitment to the highest standards in quality, performance, reliability, and innovation.

In our opinion, consumers aren't solely fixated on benchmarks. They expect a point of view, summarization, and most importantly a conclusive professional recommendation. So rather than forcing our viewers to sift though page after page of graphs, numbers and article fluff. Our motherboard reviews attempt to aid your purchasing decision by providing a high-level overview, showcasing best features along with vivid visual representation of the product and confirmation of Linux compatibility.

With that being said, let's take a better look at what this motherboard has to offer. 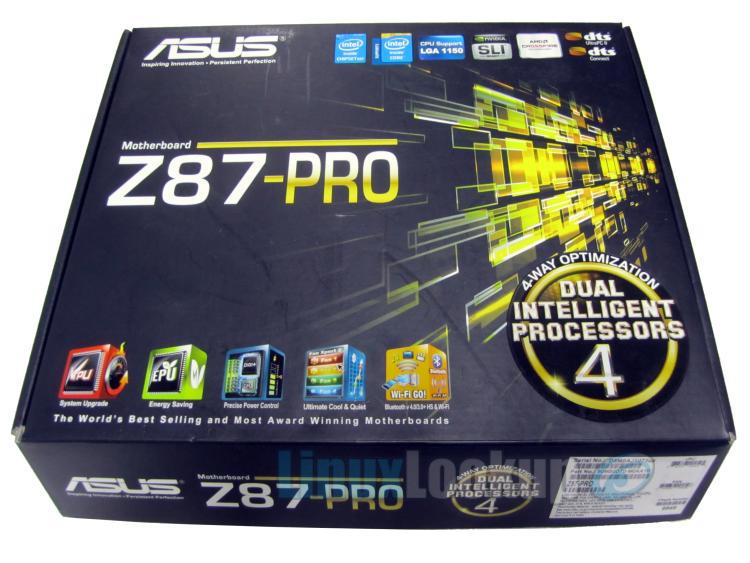 At the time of publication the ASUS Z87-Pro has an online vendor price of $207. 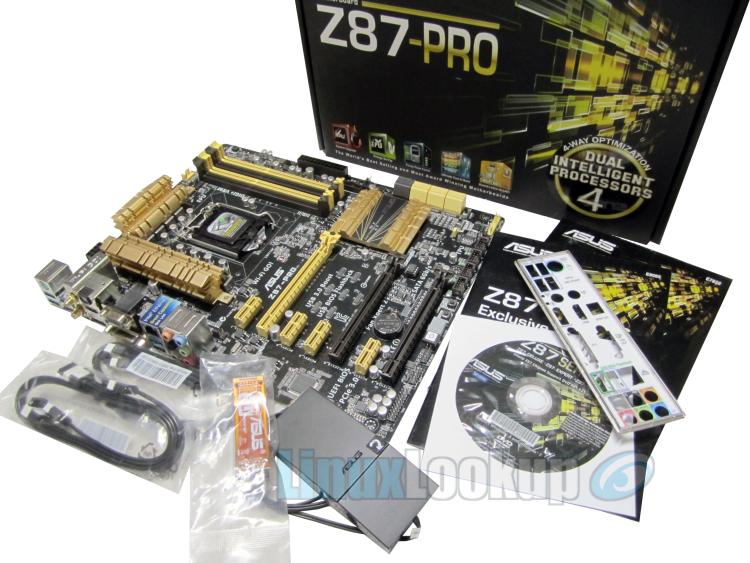 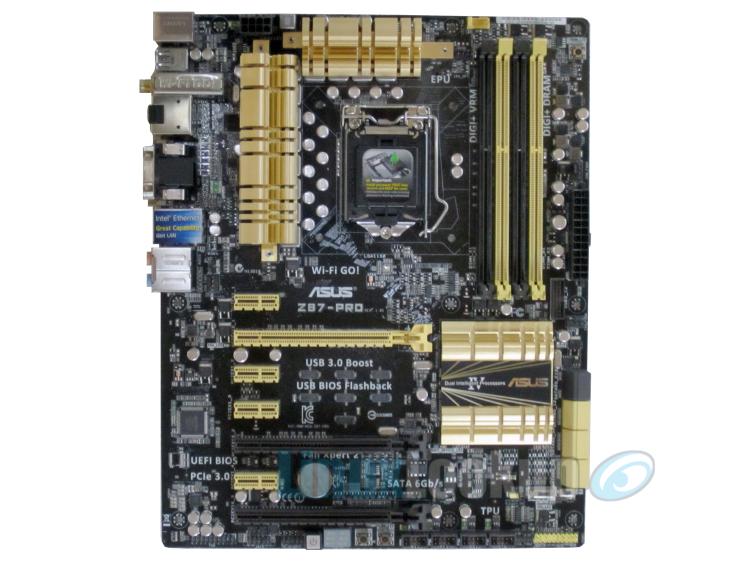 For those taking aesthetics into consideration, ASUS has introduced a new gold color scheme for it's lineup of mainstream motherboards based on the Z87 chipset. Replacing the previous blue-accented color scheme are gold-accented heatsinks on a black printed circuit board.

Aside from color, these heatsinks have a larger surface area for better heat dissipation and improved cooling. 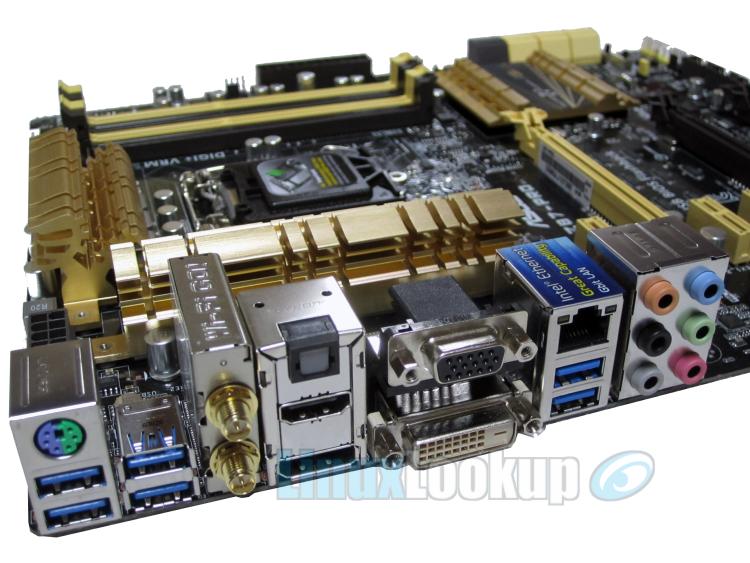 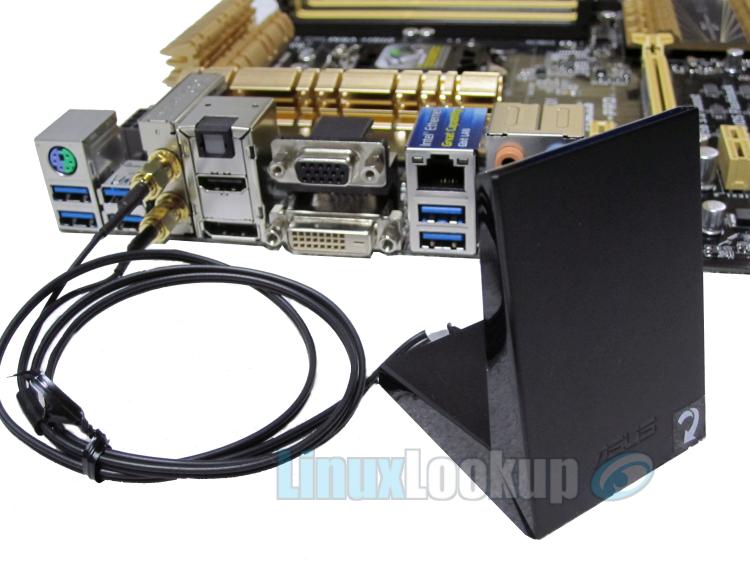 Bundled is a 2.4GHz/5GHz dual-band 2T2R antenna for 802.11n WiFi. Design of this antenna is rather versatile, allowing it to lay on a flat surface, magnetically attach to metal surface such as your PC case, or twist for an up-right position as depicted in the photo above. 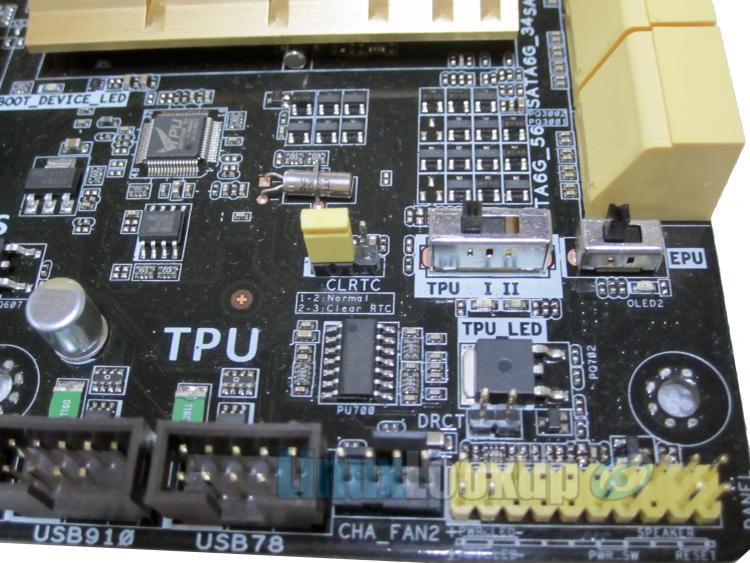 In short, use the respective dip switch to toggle TPU automatic overclocking for a speed increase up to 37%, and EPU offers up to 80% power savings by automatically dropping voltages under light loads.

Directly below TPU & EPU switches you can see the front-panel connectors. These utilize ASUS Q-Connector, a block like connector which sits in between the motherboard and the ATX case, providing a one step connect and disconnect of the computer's front panel components such as activity LEDs, power and reset switches. 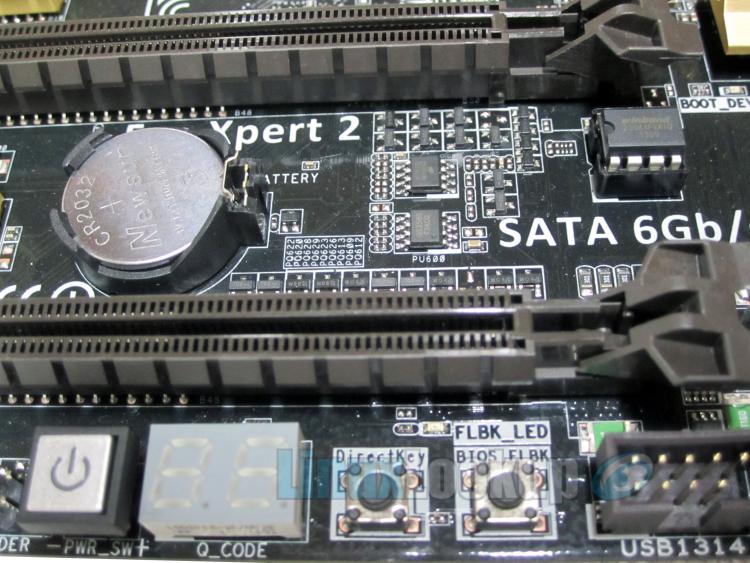 Though most motherboard manufactures now incorporate a customized UEFI BIOS option into their current models, not all do it well. ASUS in my opinion has the best UEFI implementations I've seen to date. The Z87-Pro is no exception and includes their latest UEFI BIOS.

The Unified EFI (UEFI) specification (previously known as the EFI specification) defines an interface between an operating system and platform firmware. In summary the UEFI BIOS is a mouse controlled BIOS offering a user-friendly graphical interface that goes beyond traditional keyboard only BIOS controls. Whether you're in EZ Mode or Advanced, both novice and enthusiasts can appreciate these features:

Aside from simplicity, UEFI BIOS offers several performance features too. One worthy of acknowledgement is UEFI fast-boot. This feature facilitates exceptionally fast boot times by neutralizing the splash screen and redundant system checks. Once enabled, manually issuing "DEL" on start-up to enter the BIOS can prove difficult unless you're constantly holding down. If you experience difficulty getting into the BIOS, use the on-board DirectKey to force the system to drop into the BIOS on boot.

Best boot time results will be achieved by installing your favorite Linux Operating System on a Solid State Drive. Delighted with the outcome, my experience is briefly documented later in the review under our Linux Compatibility section.

Speaking of the BIOS. BIOS Flashback is the simplest and most fail-safe method of (UEFI) BIOS updating possible. Simply drop the BIOS file onto a FAT32 formatted USB stick, plug it into the USB BIOS Flashback port and press the Flashback button for 3 seconds until the integrated LED begins to flash. As the BIOS is updated, the LED flashing frequency will increase. Once the LED goes out, the flash operation has completed and the system can be booted. This can all be done without a CPU or memory installed, only the ATX power connector is required. 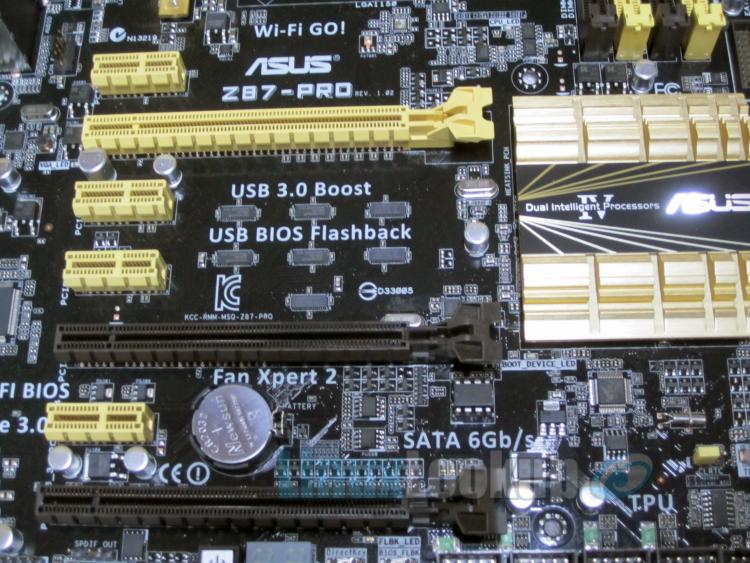 Additionally you could skip purchasing a video card and take advantage of the integrated graphics processor with multi-VGA support. This allows you to connect up to three independent monitors at once using video outputs such as DisplayPort, Mini DisplayPort, HDMI, DVI, or VGA. 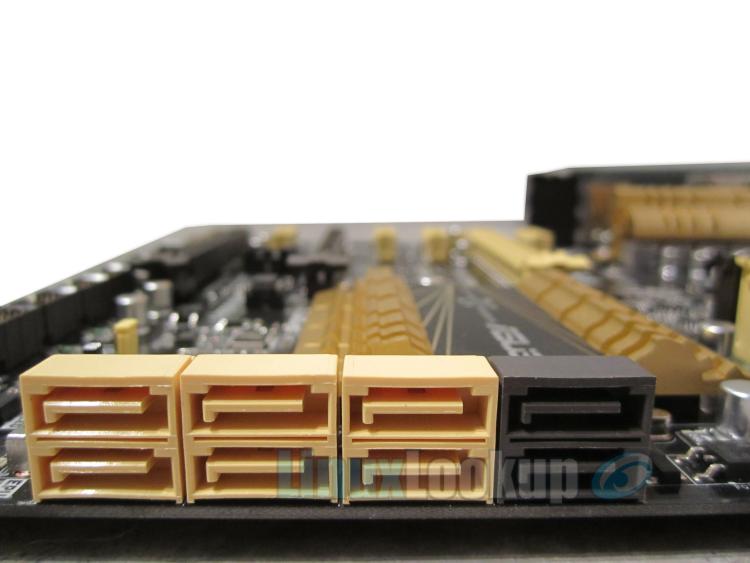 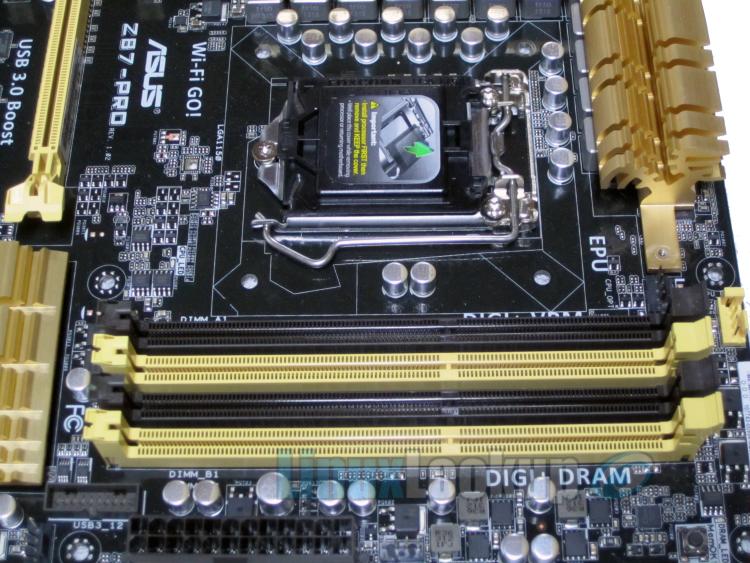 Four DDr3 memory slots are present with dual channel memory architecture supporting up to 32GB at overclocked speeds up to 3000MHz. Typical of most ASUS motherboards is the presence of MemOK!. The MemOK! feature attempts to rectify compatibility issues between the motherboard and memory by automatically loading fail-safe settings to enable basic functionality at the press of a button.

While we're on the topic of memory. If you're looking for quality DIMMs in a 32GB configuration, I would highly recommend purchasing a Crucial 32GB kit (8GBx4), Ballistix 240-pin DIMM, DDR3 PC3-12800 memory module. See our hardware configuration below for a direct link.

For the duration of evaluation I have confirmed that the latest stable release of Ubuntu Desktop 13.10 (Saucy Salamander) successfully installs and operates under default conditions. On-board video, WiFi and Bluetooth all function correctly out of the box too.

This version of Ubuntu comes with Linux Kernel 3.11.0-15-generic, which supports Intel's Z87 chipset and compiled with (U)EFI support.

I should mention that installing different Linux distributions on computers with UEFI BIOS may have mixed results and that the ASUS Z87-Pro has Secure Boot set to Windows UEFI mode by default. From what I can tell, Ubuntu 13.10 64-Bit supports (U)EFI mode.

You may identify if your installation boots the HDD in EFI mode with the following command.

You have the option of setting Secure Boot to "Other OS", but I left it enabled.

A UEFI BIOS, along with it's features, in combination with installing your favorite Linux distribution on a Solid State Drive (SSD) can produce some extremely fast boot times. Boot time from powered-off state, to a fully functional Linux Desktop was under one second. Given my hardware configuration shown here, the Operating System boot-up was nearly instant-on. Very impressive.

Overall, the Asus Z87-Pro is an exceptional motherboard and offers a slew of features which rival those of more expensive boards. I recommend it to anyone who is looking for a great mainstream motherboard that is made from high quality components, offers innumerous options for one-click overclocking and supports the Linux Operating System.