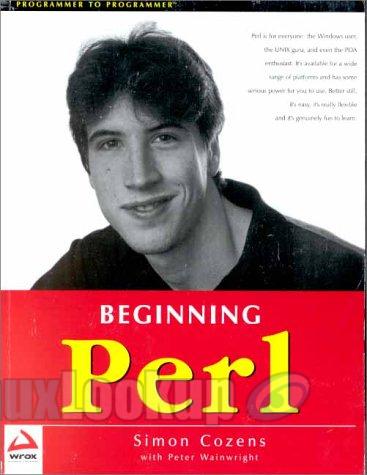 Perl is a well-established programming language that has been developed through the time and effort of countless free software programmers into an immensely powerful tool that can be used on practically every operating system in the world.

Perl started out as the 'Swiss army knife' of computer languages and was useful primarily by system administrators, but over time it's grown into a robust language used by web-developers and programmers worldwide. It's also a great way to learn programming techniques and develop your own style of coding." The goal of this book is to take the hand of the first time Perl programmer, to guide them through the basics and lead them all the way up to working with files/databases as well as Perl-based web development (CGI).

What does this book cover?

Beginning Perl starts off simply with the installation of PERL. It takes you through installation for both Linux/Unix and Windows systems. As a whole, the book is not OS dependent, and the author does a good job at pointing out any differences in code that occur between the two. As is stated in the book, "There's more that one way to do it", which is true with a lot of languages, but especially with Perl. There are many different ways to attain the same goal in programming, this book does a very good job of taking you through the different paths which all produce the same results. This allows you to learn your own favorite style of programming.

Chapter 14: The World of Perl (pg 211) The first 13 chapters of the book build the basic foundation of your knowledge of Perl. The 14th and final chapter gives you a feel for everything else that is out there. This chapter covers issues involving networking, mathematics, cryptography, and even some GUI interfaces for which you can program with Perl. *cue the weird Visual Basic flashbacks*

Simon Cozens has been programming PC's since he was 10, and has been using Linux and programming in Perl for over 3 years. Simon is a freelance programmer and has many well known clients including Oracle Corporation. Some of his Perl programs include a literate programming environment for Perl, a SPAM trapper, and a set of networking tools. We do not have an e-mail address for Simon, but he is known to frequent the Efnet IRC channel #perl. Go figure.

Peter Wainwright is a software consultant and developer. He gained most of his early programming experience on Solaris, writing C applications. He then discovered Linux, shortly followed by Perl and Apache, and has been programming happily there ever since. When he is not developing software or writing professionally, he spends much of his free time pursuing his interest in space tourism and maintaining the ever growing Space Future website, which is based on a Linux server running Apache, actually. Peter also authored the book Professional Apache, which we have previously reviewed.

Beginning Perl is a fantastic book for any programmer who is itching to learn the Perl programming language. I must warn you that it might progress a little too quickly for someone who has never done any previous programming, so if you don't know what a "string" is, then this book probably isn't for you. The book begins with a step-by-step guide to installing Perl on your favorite OS, with examples for Linux and Windows.

The book soon progresses and covers many topics including how to write CGI scripts and how to access and work with databases. Although the book covers a wide variety of topics, each is quite well explained, and includes many great code examples. As with most programming books, Beginning Perl includes a variety of exercises to go along with each chapter. These exercises are important to the learning process. Although no companion CD-ROM comes with the book, Appendix H contains example solutions to all exercises in the book. These examples are also available for download from the publisher's website. All in all, I found this book quite well written and explanatory, with the minor exception of the many typo's we found.

A great book for a programmer wanting to learn PERL.