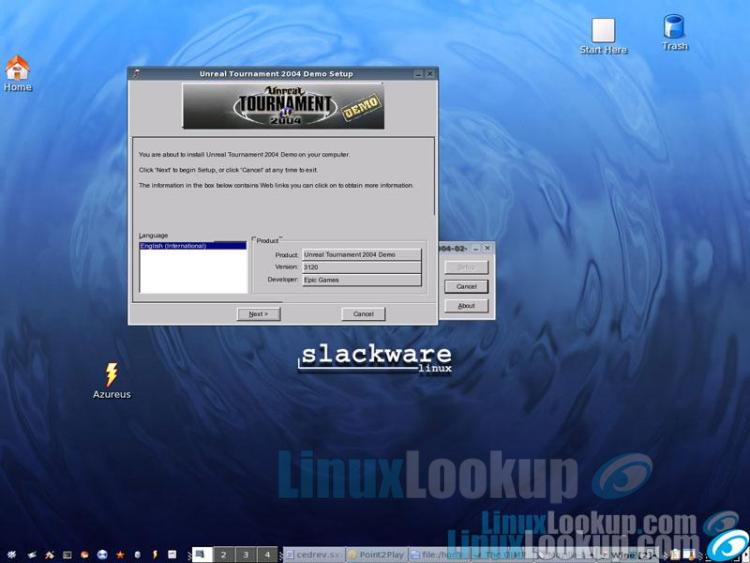 The release of Transgaming's newest version of WineX, renamed Cedega, was met with considerable enthusiasm and interest in the Linux community last week. So much so that their server was inaccessible the day of release. Cedega is claimed to be much improved, offering the ability to play recent games released for Windows "seamlessly and transparently" under Linux. They provided me with a copy, and I was curious to see if it lived up to the hype.

Cedega is available as an rpm, deb or tgz file. Point2Play is a graphical front end to Cedega and available in the same formats. Point2play comes bundled with all dependencies, a very nice touch, and includes the font installer program (also available as a separate download).

I was installing on Slackware 10, so I downloaded the tgz files. A simple #installpkg for Point2play was all that was needed. Point2play retrieves and installs Cedega for you. It also downloads and installs Microsoft Core Fonts with the click of a button.

The first thing I noticed was a tab titled "System Tests". There are four tests that help to determine if your system is ready to run Cedega.

"Test for Hardware 3D Graphics Acceleration" tests to see if your graphics card is capable of running 3D-intense games and if it has been set up correctly. I clicked, the familiar glxgears box opened, then I was greeted with two green graphs. They gave me an OK for OpenGL Direct Rendering and for 3D rendering speed.

"Test for Sound Support" plays a sound, then asks you if you heard it. You are informed that Cedega uses the OSS audio device and told to consult your distribution's documentation if you didn't hear one. Thankfully, I did.

"Test if POSIX threads (pthreads) are Required" gave me a confusing pop up box. It said "You are running a distribution of Linux on which Cedega requires the usage of pthreads on (ie. Very recent glibc). Unfortunately the maximum stack size on your distribution is not large enough for some games, and therefore you might have issues." I am then told, "When using Cedega 3.2 or newer, you may not need to use pthreads which can help avoid these problems." I admit ignorance here. I am baffled by the wording. I am being told Cedega requires pthreads, but with version 4.0 I may not need to use them, which can help avoid problems. My yellow graph boiled it down for me, saying "Some Games Might Have Problems".

"Test CD/DVD Drive" checks the accessibility of the CD-ROM devices and if they are capable of supporting Copy Protected games. I got the green light showing my cdrom was available. The documentation is outstanding and will be a great help if yours isn't.

Since I don't dual boot and lack free time, I haven't run Windows games in years. I have been happy with the standard Linux games, including Ksokoban, Kbounce, Ktron and of course Tuxracer and Tuxkart. Recent additions such as Frozen Bubble and the updated SuperTux have a modern feel. I haven't had much experience with Linux ports such as UT2004. I like that Cedega was giving me the opportunity to try out some modern games.

My first try was the demo of Half-Life Uplink, downloaded from the Nvidia site. I fired up Point2Play and clicked Install. A box opens asking for the path to the executable, the program title, the Cedega version to use, and two check boxes (big EXE and Run Directory). I found the path, named the program, left the default Cedega as my choice and clicked both boxes. Big EXE supports games packed as one large executable. Run Directory sets the current working directory to the game executable directory. You also have the option to mount and unmount your disk. I clicked continue, and I was transported back to the days of the ugly install wizards. The Wise Installation Wizard popped open, and the game installed without a hitch.

The game icon now showed up in my main window. I clicked it, the clicked play. The game worked with no problems. The graphics were clear. Sound worked well. I was pleased with the speed and movement. TransGaming delivered on their promise of seamless and transparent game play. I couldn't tell that this game wasn't written for my operating system.

Next up was the Unreal Tournament demo. I started the install, and the WinZip Self-extractor started. The Unreal installer installed without any problems. The only catch was that it didn't add an icon in Point2Play, so I am unsure how to start it other than through the installer.

The game looked great. I could tell no difference from the Linux version. The speed was excellent, sound was great. The game just worked. Cedega was now two for two.

I installed the Painkiller demo and launched the game. Cedega really blew me away here. The sound was fantastic, the graphics outstanding, and the game played without any problems (other than my lousy skill level). It is impressive to see a game run so smoothly. The game rendered perfectly, by far the best looking of the games I installed.

Installation brought up the Installshield Wizard, a trip down memory lane for me. The game installed well, until it reached the point of installing the audio codec. The installation then froze, and I had to kill the wineserver. To be fair to TransGaming, the website tells you that the game doesn't run.

What Games Will Run?

From the TransGaming website, here are some games that will run perfectly: -Half-life -Max Payne -Warcraft III: Frozen Throne -Diablo 2 -Warcraft III Some games that TransGaming claims are playable with minor irritations: -Jedi Knight -Doom Collectors Edition -Star Wars: Knights of the Old Republic -Half-Life: Firearms -Painkiller There are many more in both categories.

Is it worth the money?

I think a subscription of five dollars a month is justified. TransGaming is committed to providing updates to make the latest games available. If you are tired of dual booting or don't dual boot, and are a gamer then this is an excellent choice. It works as well as promised. There is an helpful forum available to subscribers. Point2Play is one of the easiest programs I have used in Linux. If I had more time for gaming, I would definitely join.

The only downside I see is philosophical rather than a problem with Cedega itself. There aren't many Linux versions of popular games available. By making it so easy to run the Windows versions, there may not be much of an incentive to develop for Linux. That said, I am glad that there is finally a workable option for people that do not run Windows at all to get to game. If you only run Windows to game, you may finally get to reclaim that disk space for the reasonable cost of five dollars a month.

I am really impressed with this product. It lived up to the hype. Anything that helps push desktop Linux adaption is a good thing, and Cedega can only help in that cause. They have a top notch product that is in constant development. There are 2-3 major releases a year, and updates every 6-9 weeks. The documentation provided is fantastic and very detailed, particularly helpful in setting up the cdrom. Included in the subscription is support, access to their forums and the ability to vote on what games they should support. I think that justifies the negligible cost. Without sounding too much like a slappy, I applaud TransGaming for what they have done here. Fine work. 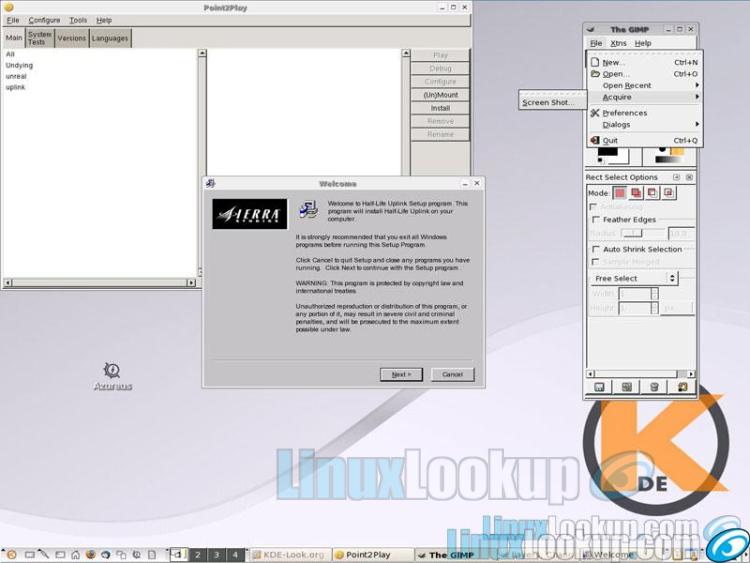 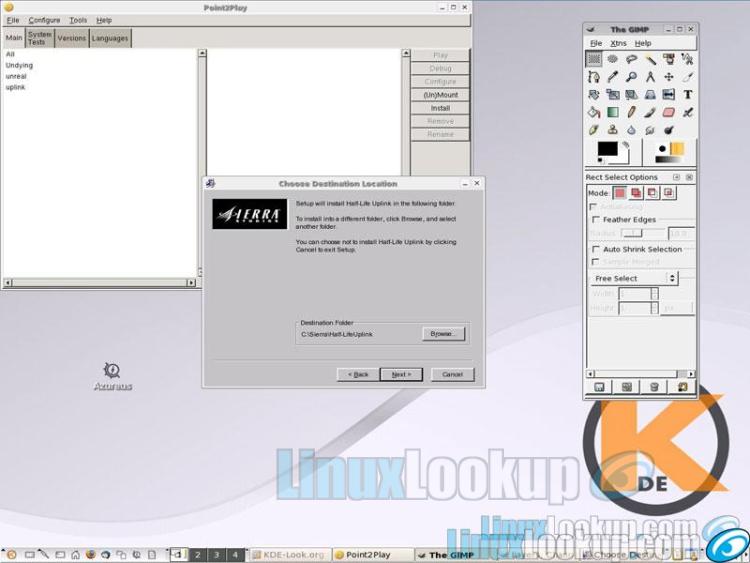 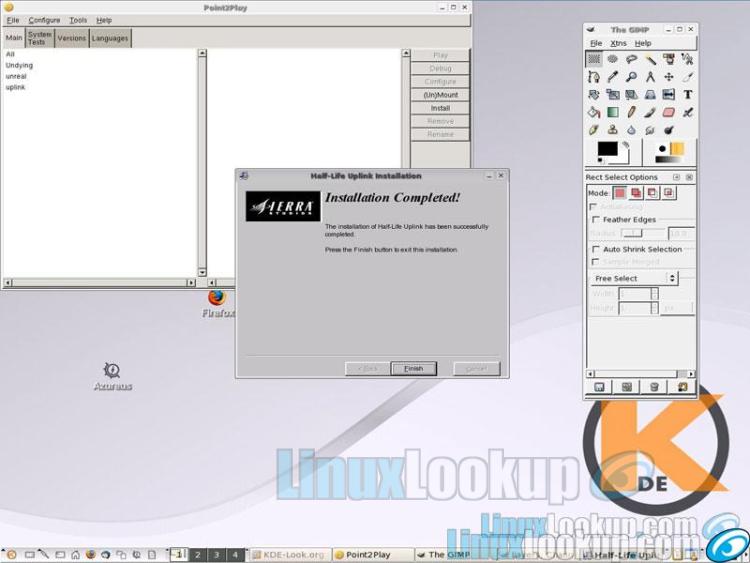