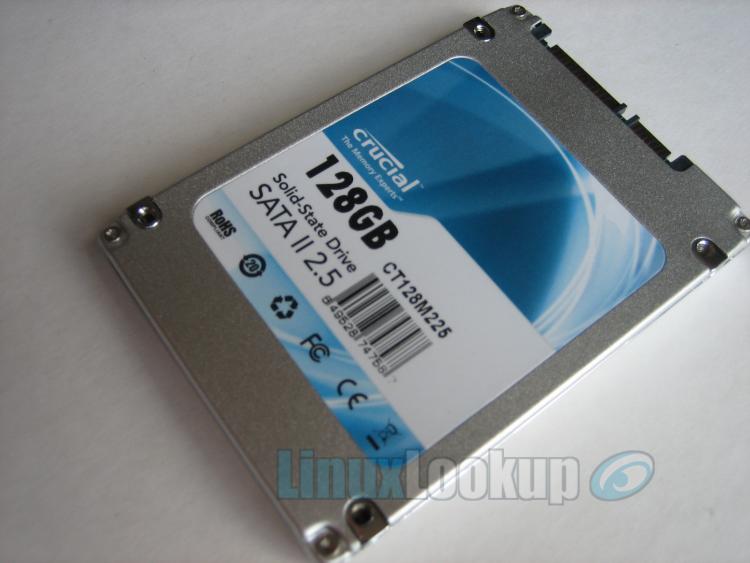 In this review we're going to take a look at the Crucial M225 128GB Solid State Drive and the benefits of making the switch from a standard hard disk to Solid-State. Before we begin, I'd like to go over a general introduction to Solid State Drives for those individuals unfamiliar with the technology.

Solid-State Drive technology has been around for many years, in fact according to history the first modern type of Solid State Drive was developed by StorageTek back in 1978. For almost a decade now the military and aerospace industries have been replacing Hard Disk Drives (HDD) with Sold State Drives (SSD) as they offer resistance to shock, vibration, high altitude and grater temperature.

Only recently have Solid State Drives been introduced into consumers markets. Taking advantage of a reduction in power consumption over conventional mechanical HDD, we first started to see them offered in compact portable devices such as Notebook and Netbooks.

As of August 2009 the aforementioned points are applicable to most Solid State Drives, not just the product reviewed in this article. Now that you have the basics of SSD technology down, lets take a look at what Crucial's latest SSD product has to offer. 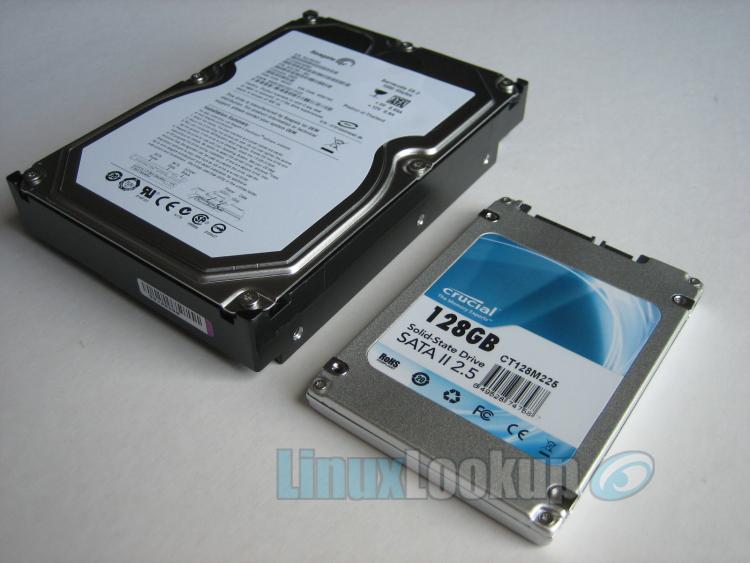 Unlike conventional 3.5-inch Hard Disk Drives, most Solid State Drives conform to an industry standard 2.5-inch form factor. As illustrated in this photo you can see there is a considerable size difference between the two. This has created a common misconception that 2.5-inch drives are intended for installation in only small portable devices such as a Netbook or Notebook. This is false. All you need is a 2.5" to 3.5" drive bay mounting bracket. Unfortunately Crucial does not included a bracket with their drive like other manufactures. But you may purchase one like the SilverStone 3.5" to 2.5" Drive Bay Converter from an online retailer for under ten dollars. 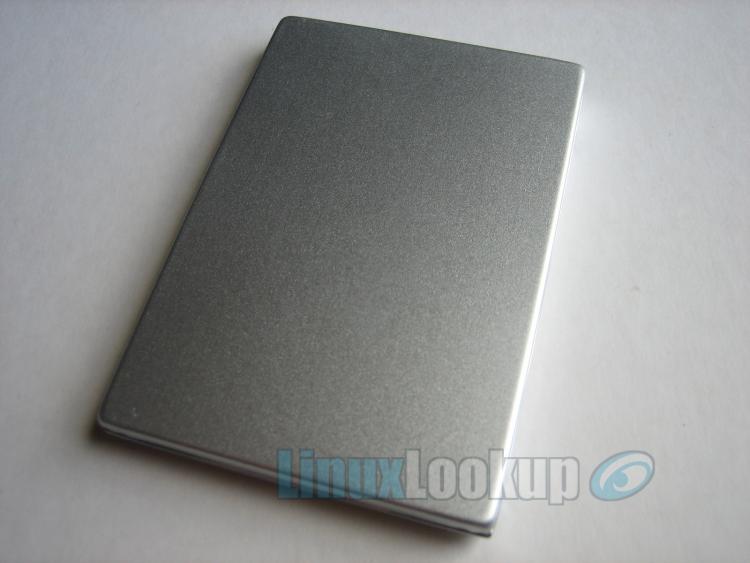 The thin light-weigh aluminum enclosure appears to be quite durable. Unlike Hard Disk Drives, Solid State Drives are practically impervious to impact damage and do not require vibration dampening or anti-shock enclosures. Crucial claims that the M225 has a Mean Time Between Failures (MTBF) of 1 million hours. This estimation seems to be somewhat below the standard for MLC drives, but certainly not a deal breaker as one million hours equates to 114 years! MTBF is a theoretical projected average based on statistical sampling and mathematical models whereas a manufacturer warranty is guarantee against defects. Either way, Crucial has you covered with a 5 year warranty. 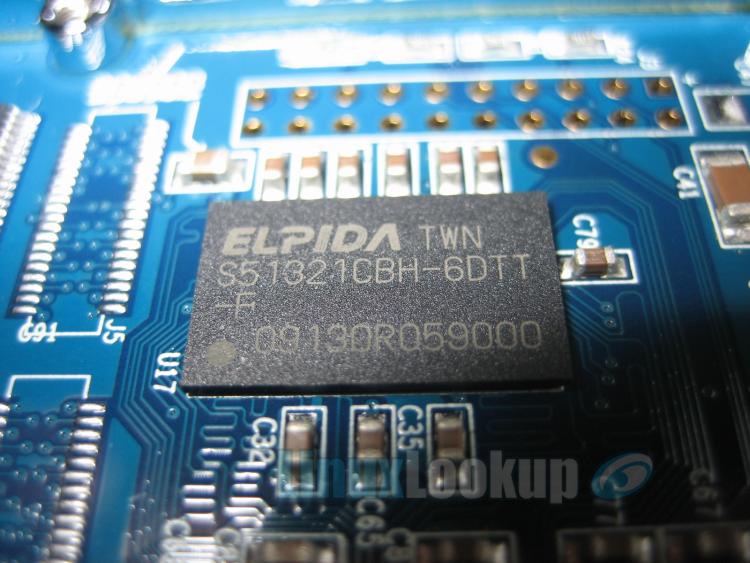 The Crucial M225 has a 64MB cache that is driven by the Elpida SDRAM memory chip shown in this photo. The Elpida 64MB SDRAM module is marked with S51321CBH-6DTT-F, but according to Elpida the actual product part number is EDS51321CBH-M-F, which is a 133MHz (CL3-3-3) mobile RAM component. This 64MB cache buffer improves performance and removes inability to handle random write patterns (stuttering) that effect other drives with less cache memory and different SSD controllers. 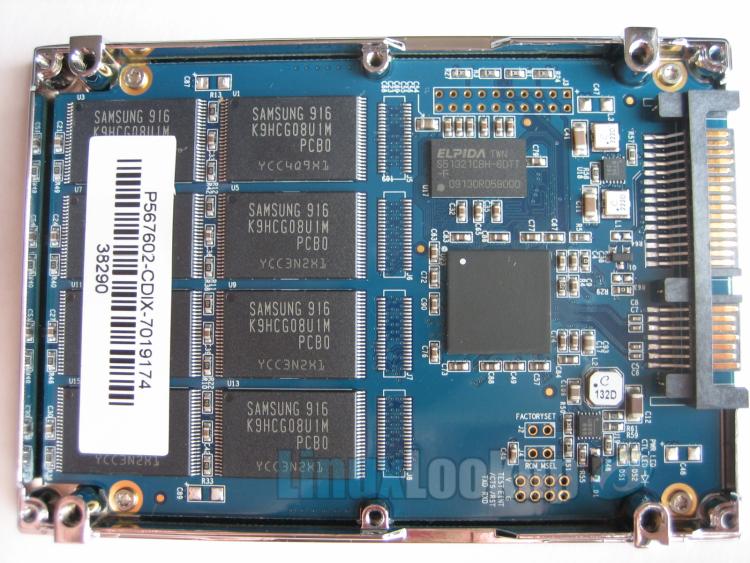 Some would argue Crucial has been a little late to the race with their SSD offerings. Though I do not have a definitive answer as to why it takes them so long, lets not speculate here. We certainly cannot criticize a company that does proper research & development the first time around. One thing is for sure, Crucial has made a wise decision by using the Indilinx Barefoot controller in all their M225 Series drives. Barefoot is widely viewed as one of the best high-performing Solid-State drive SATA controller interfaces on the market to date. Though most manufactures fail to mention the controller in their technical specification, rest assured you're getting one of the best when purchasing a Crucial M225 Series SSD.

Ubuntu 9.04 supports the option of installing the new ext4 file system. ext3 will remain the default file-system for Jaunty, and Canonical will consider ext4 as the default for the next release based on user feedback. There has been extensive discussion about the reliability of applications running on ext4 in the face of sudden system outages. Applications that use the conventional approach of writing data to a temporary file and renaming it to its final location will have their reliability expectations met in Ubuntu 9.04 beta; further discussion is ongoing in the kernel community. For our benchmarking we've chosen the ext4 file system. Your performance may vary. Factors affecting performance include: The file system used (e.g. ext2, ext3, etx4, jfs, reiserfs, Btrfs, xfs).

As this is our first SSD review, we've decided to post standalone benchmarks rather than pit the Crucial M225 up against a standard Hard Disk Drive. 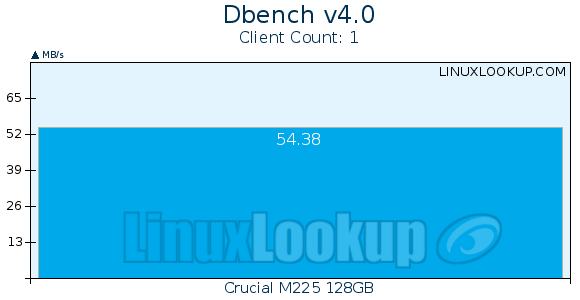 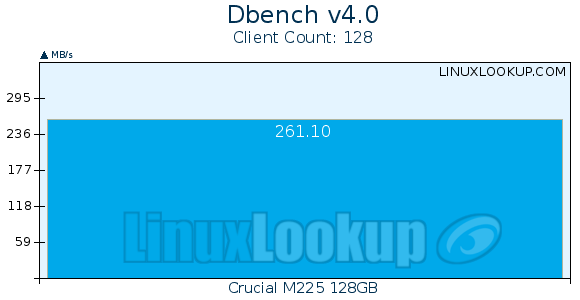 Simulating the load of 128 clients. 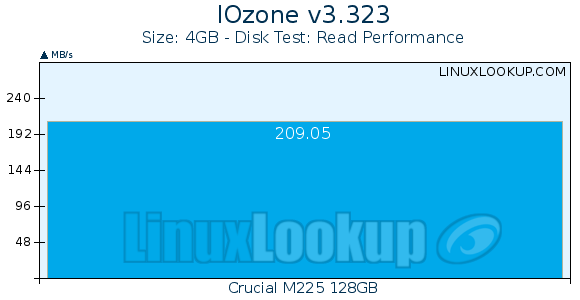 Iozone tests the speed of sequential I/O to actual files. Therefore, this measurement factors in the efficiency of your machine's file system, operating system, C compiler, and C runtime library. It produces a measurement which is the number of bytes per second that your system can read or write to a file. Here we simulate a 4GB sequential read. 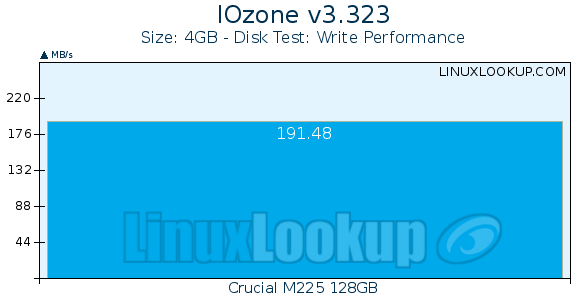 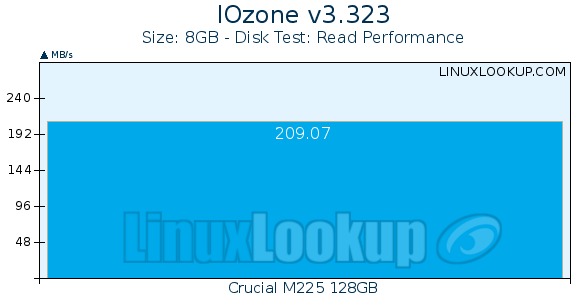 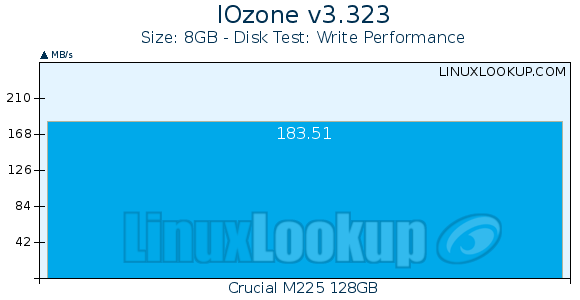 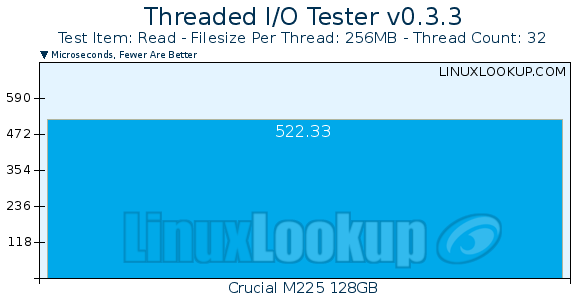 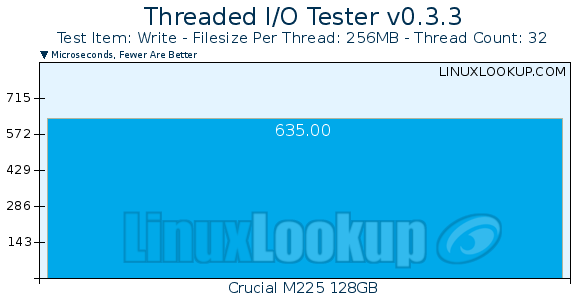 Here we write 32 concurrent I/O threads, each 256MB in size.

You may have read about a performance degradation that occurs after prolonged usage of Solid State Drives. This is associated with block-rewriting and over time, as files are written, moved, deleted, or replaced, many blocks are a left holding what is essentially orphaned or "garbage data", and their long-term performance degrades because of it. This garbage data has plagued SSD's for quite some time and basically stems from the drive not knowing when a file is deleted, only when one is overwritten.

A new SSD command called "TRIM" was designed explicitly to mitigate this problem. This command from the file system tells the SSD's controller which logical data blocks have been deleted, so that the controller can reset those memory cells that were used up by those deleted blocks. Having said that, both the Operating System and drive firmware must have support for in order for this to happen. Windows 7 has TRIM features that will improve performance in three ways. It will reduce the amount of data to be deleted, which improves the SSD's lifespan; delete garbage data in advance, which speeds up writing of data; and maximize the amount of unused data, which helps even out the wear and tear on the SSD.

Currently Linux has no support for DSM/TRIM in the mainline kernel. There are patches to add experimental support for TRIM, but those have yet to be proven on a real drive with real TRIM. Though automatic-TRIM seems to be a ways off still, there is the option of hdparm with experimental trim/wiper scripts for SSD's. I personally have not tried this manual wiper script, and would recommend you wait for proper updates from the SSD manufacture.

Another popular SSD manufacture OCZ in conjunction with Indilinx has recently released new firmware (Version 1.30) for their entire line-up of Vertex Series SSD's which actively reclaims these blocks during idle I/O time. This garbage collection function is named NAND Launderer and supposedly restores performance to like-new condition, even on a severely "dirtied" drive.

As mentioned earlier, the Crucial M225 has an Indilinx controller as well, however the NAND Launderer algorithm is exclusive to OCZ and not present in Crucial's firmware at this time, nor is the TRIM function supported. This should not deter you from purchasing the a M225 SSD as Crucial has stated similar features will be coming in a future firmware release. I will update this article once this occurs.

Update Oct/18/09: Crucial has released a firmware update for the M225 which offers ATA8 ACS2 TRIM support, along with a few other fixes. If your Crucial M225 Solid-State Drive has firmware 1711 you must first revert back to the 1571 firmware prior to updating to the new 1819 version. Instructions, including the appropriate downloads can be found on the Crucial M225 product page.

I believe it was January 2008 when we last saw a Crucial branded SSD, from what I recall, it wasn't well received and widely reported to under-preform at the expense of your pocket book. As the M225 Series is a positive step towards restoring faith in Crucial SSD's. Some would argue Crucial has yet again been in the lurch as their newest Solid-State Drive incorporates technology that other mainstream SSD manufactures have been offering for months now. This is true, however, the M225 Series matches performance at a much better price point of only $2.57 per gigabyte. The Crucial M225 Series SSD is available in 64GB (CT64M225), 128GB (CT128M225), and 256GB (CT256M225) capacities, all competitively priced. But given the grandeur of Solid-State technology right now, prices are steadily decreasing while storage capacities and performance gains are on the rise with most manufactures.

Solid-State Drives can drastically increase your computers performance and responsiveness for every day operations, perhaps now becoming the biggest gain on performance from a single hardware component. Despite the lack of a much needed firmware update, rest assured the Crucial M225 128GB SSD is a great product that gives other premium drives a run for their money. You won't be disappointed with it. 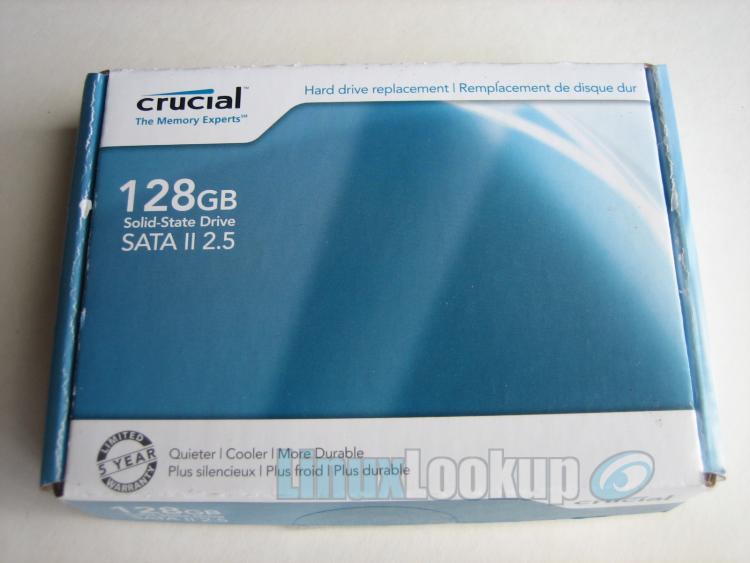 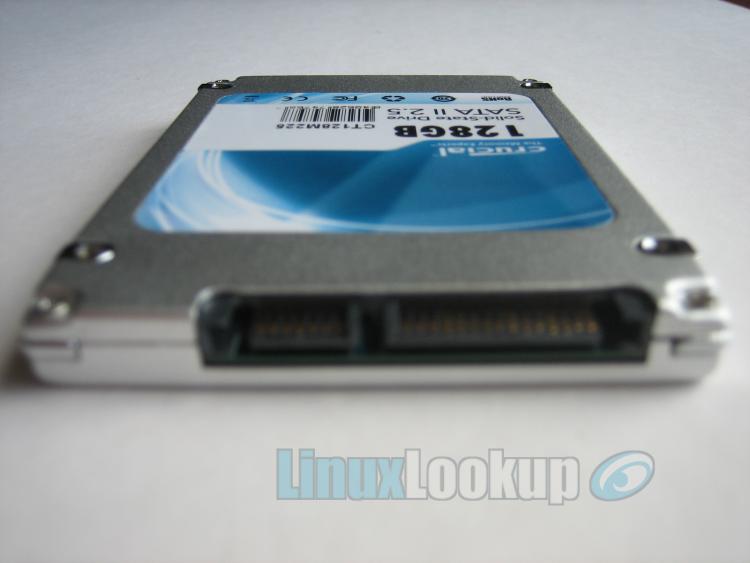 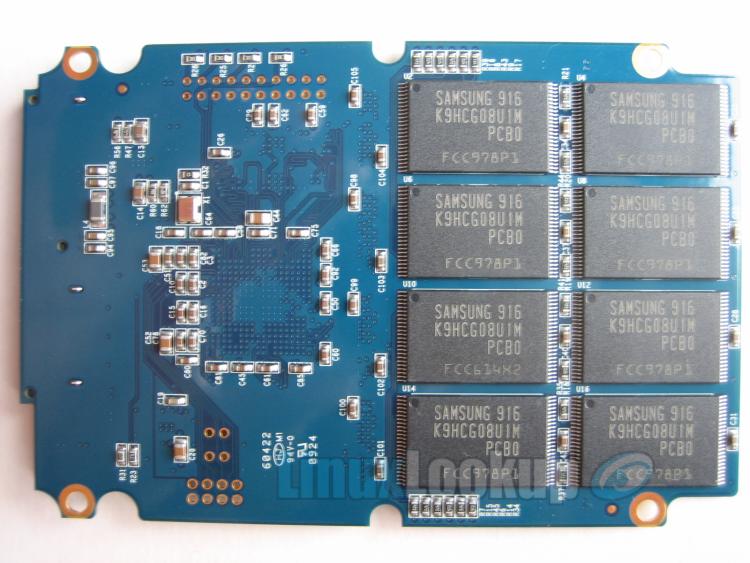 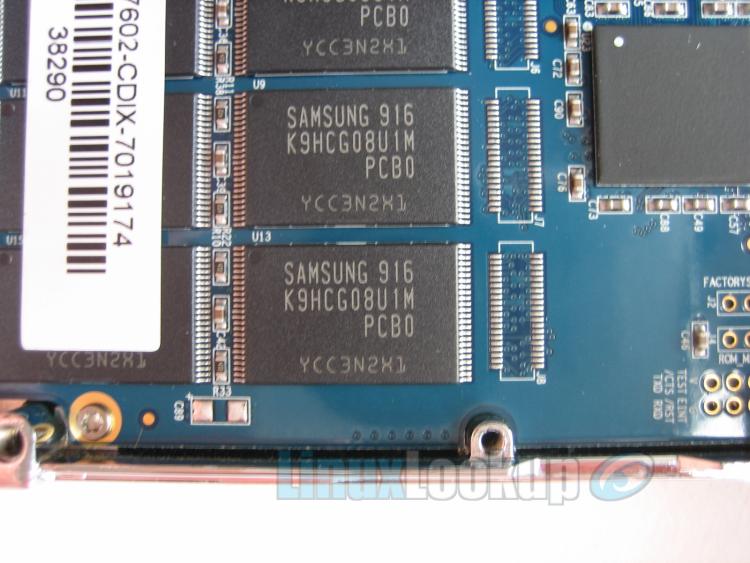 The Crucial M225 128GB balances a great price point with excellent performance. No doubt you're going to love the gains associated with switching to a SSD, not to mention to cold-boot and shutdown time of 7 seconds!