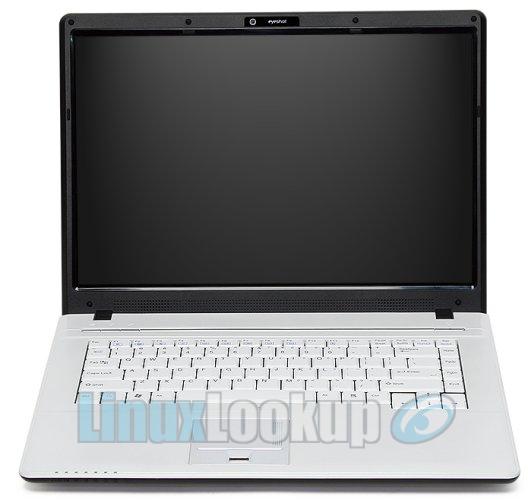 The system I tested was powerful. It has a 3.06GHz processor (with Hyper Threading support), 1 Gigabyte of RAM, and an ATI Radeon Mobility 9000 with 64Mb VGA ram.

PCMCIA is a Type II PCI Cardbus PCMCIA socket. The battery us a Smart Li-Ion battery. Finally, it comes with a one year warranty and is upgradeable. The provided operating system was Fedora Core2.

My first impression was aesthetic. It is a nice looking machine. It feels solid, the hinges are sturdy. The screen seems large. There are three silver buttons on the upper right corner that launch the Mozilla web browser, Evolution email client and a power button that cleanly shuts the system down and can even do a hard power off, if needed. The buttons are a small but nice touch.

I booted into Fedora Core2 and was immediately impressed with the crispness of the display. I had plugged my ethernet cord into the back prior to booting, and was immediately set up to be online. Very nice. No configuring necessary. I went to freshrpms.net, downloaded apt and quickly added a few must haves. The default software selection provided was fine, but we all know the few must-haves that Fedora leaves out for well thought out reasons. Software installation was a breeze once I installed Synaptic, the graphical front end to apt.

LinuxCertified provided a Netgear PCMCIA card to test 802.11g support. I got on the road, and headed to a coffee shop that provides free Wi-Fi access. I booted, and the card connected effortlessly. I was online and surfing. This required nothing more from me than plugging the card into the side of the laptop. There was nothing to configure. No editing configuration files as complainers would have you believe. KDE provided a great applet showing me the strength of my connection. LinuxCertified scored more points here.

The next area that interested me was software suspend. This is an important feature for a laptop, and I was skeptical about how it would work with the 2.6 kernel. The laptop is pre-loaded with Software Suspend 2.0 (SWSUP2), and it is accessed by pressing the Fn-F1 combination. I opened a document and a terminal, then pressed the key combination. A "Suspend to Disk" screen appeared with a handy progress graph and a message about what it is doing (writing caches, ready to power down) and five seconds later the machine was powered down. A quick tap of the power button brings you to grub, then "Resume from Disk" appears. Seconds later I was right back where I was. During one resume, I was put right back into the screen saver that was running during suspend. This is a very nice feature, so much better than shutting everything down, rebooting later and reopening everything.

Next up was the optical drive. The combo drive burns at 24x. I burned a 41 minute cd with k3b, and it took 4:16. The disk played without problem. I popped in the second disk of Fight Club, with all the extras. This was the first time I had attempted to play a DVD under Linux. I opened Ogle, and up came the contents of the disk. It was nice to use the mouse to navigate the special features menu of the disc. Playback was clean.

The Synaptics mouse comes with an extra two buttons in the middle. They provide scroll functionality, which proved very handy. On my desktop, using the scroll wheel is second nature. It was nice to be able to do the same thing with the two buttons. It is a small touch, but one that positively affects most of my computing. I have to hand it to LinuxCertified for adding this. I read that there had been a problem with Fedora Core2 and the Synaptics mouse where the mouse was "jittery". This has been fixed on this laptop. The mouse worked as I would expect it to.

Battery life seemed standard. KDE provides an applet monitoring battery life that was pretty accurate. I found I got around two and one half hours of battery life. Recharge seemed quick, but unfortunately I didn't figure out how long it took to get back to 100%. The software suspend function is a big help here. I could suspend and resume effortlessly, saving the hassle of shutting down and rebooting.

I didn't have time to play with setting up a network sync with my desktop. LinuxCertified plans to work on a USB based sync tool later this year, which will be great if it works out. For now it looks like setting up a typical network is the option for sharing data between machines. I took away a point for innovation here, because easier syncing would be a nice option to have.

After a day or two, I found myself avoiding my desktop system and mainly using the laptop. It honestly had all the power and speed I needed. It was nice to not be chained to my desk. I could see this system replacing my desktop. Based on my experiences, it may. It handled everything I threw at it. I installed Unreal Tournament 2004 and it looked great. Glxgears gave me over 2100 fps as the website claimed. Multimedia worked without fault. I have to give Fedora Core2 credit. It ran solidly on the laptop. The freshrpms.net repositories have filled up, so I was able to easily add just about anything I wanted to the system. LinuxCertified has done an outstanding job with their configuration. Everything worked.

I found that this laptop is further proof that Linux is ready for the desktop. The laptop works exactly as promised, providing a fully functional Linux system that has all the power of a desktop system. I liked the system so much that it presented a problem writing the review.

I feel it deserves the Editors Choice Award, but worried about seeming more like a cheerleader than a reviewer. I tried to find a problem with the laptop, but was unable to find one. It is solidly built and configured. All the software works. Things I didn't expect to work well, like the 802.11g, exceeded my expectations. It was great to avoid the slight irritations I have run into with installations by receiving an installed and configured system. The currently offered specials, which include a free upgrade to a 5400 RPM disk (40GB), a deluxe laptop bag and free standard shipping are nice additions to a great system.

Excellent product. I was so impressed that I may purchase one for personal use. I recommend this laptop without reservation. If you want a powerful system that just works, this is for you.