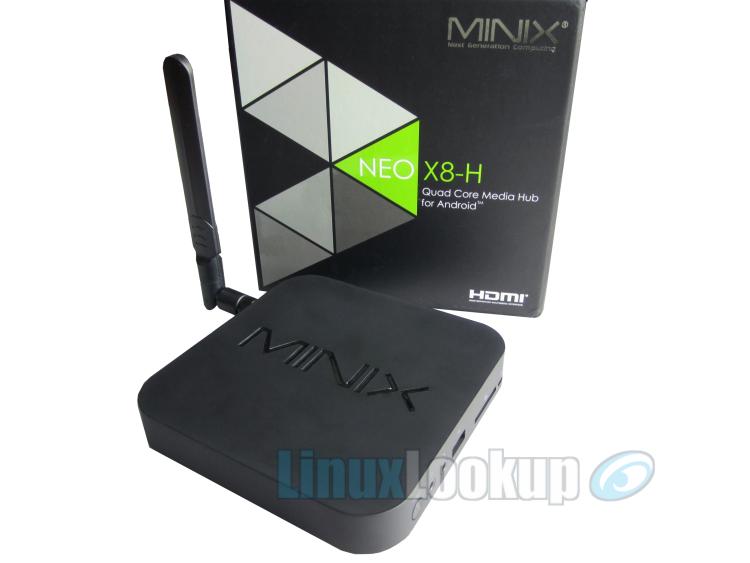 Let take a look at what the MINIX NEO X8-H Media Hub has to offer.

MINIX NEO X8-H is a step-up from X8, offering all aforementioned features, but with an Amlogic S802-H SoC which offers Dolby & DTS audio hardware decoding outside of XBMC and doubles the eMMC Storage to 16GB.

Either model would be a great purchase, but with a difference of only $20 in cost, I'd recommend considering a purchase of X8-H over the X8.

From this point forward all information within pertains to the X8-H model. 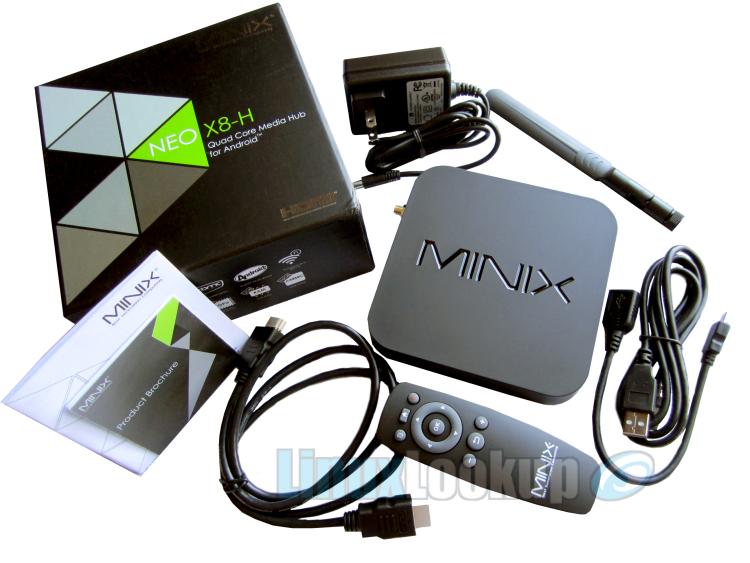 Contents of the retail box has everything you need to get started. One MINIX NEO X8-H Media Hub, IR remote controller, WiFi antenna, HDMI cable, Micro USB cable, OTG cable, multi-language setup guide and 5V (3A) power adapter. When purchasing, pay special attention to which power adapter type is included as there are different options. If you reside in the USA or Canada, select NEMA (North America).

The matte black housing is constructed of formed plastic and build quality is exceptional. Top of the unit has a MINIX logo in piano finish, this doesn't add any functionality but looks nice. Detachable external WiFi antenna is positional which makes it easy to tuck the unit into a small vertical space.

Power button and all input/outputs are well labeled, however I do have a gripe with illumination of the power status LED. Granted, due to incredibly low power consumption (See Energy Efficiency test below) the MINIX NEO XH-8 was designed to be left on or stand-by mode when not in use. But this one stage blue LED is barely visible when the device is powered on, making it extremely difficult to determine status at a glance. This could be fixed with increased illumination and the addition of a two stage LED indicating both powered on and stand-by status. 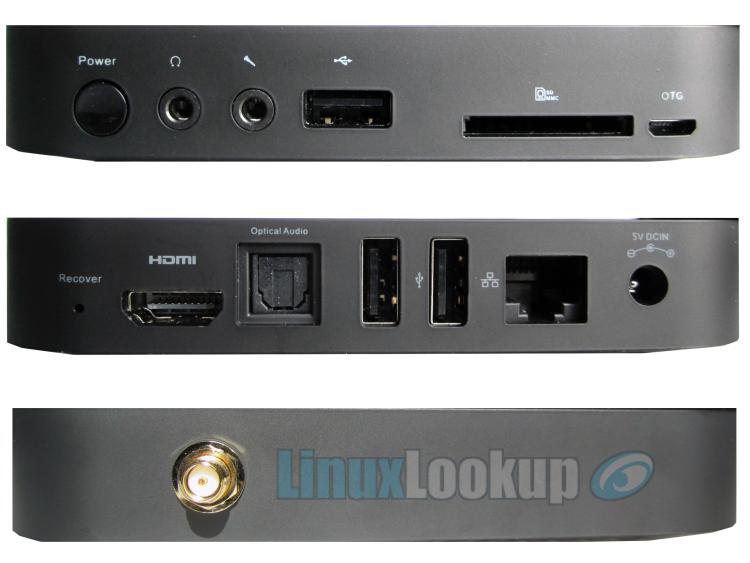 MINIX wasn't first to market with an Amlogic S802-H SoC, Quad-core ARM Cortex-A9r4 CPU and Octo-core Mali-450 GPU hardware configuration. But there is something to be said about taking your time designing quality product both inside and out. In my opinion, MINIX produces some of the best Android devices out there. The official MINIX NEO X8-H product page (Linked above) provides an enthusiastic explanation of the performance packed hardware within X8-H, please refer to this information if you're seeking further marketing commentary. Bundled is an infrared (IR) remote control powered by two AAA batteries (not included). Conventional menu, home, power, return, volume, navigation and return buttons are available. Nothing compelling, but certainly capable of navigating the Android interface, providing you're in line-of-sight.

I should also mention that the included IR remote cannot power-on the device when powered off and is intended function according to MINIX. Personally, I'd like to power-on via remote, seeing as I'm the type to shutdown all devices while not in use. If you're looking for better control over your Media Hub, I'd suggest checking out our MINIX NEO M1 Wireless GyroMouse Review.

MINIX NEO X8-H runs Android 4.4.2 (KitKat) with Kernel Version 3.10.33. On first boot you'll be presented with an initial system setup, and after some rather simplistic setting choices the device is ready to use. 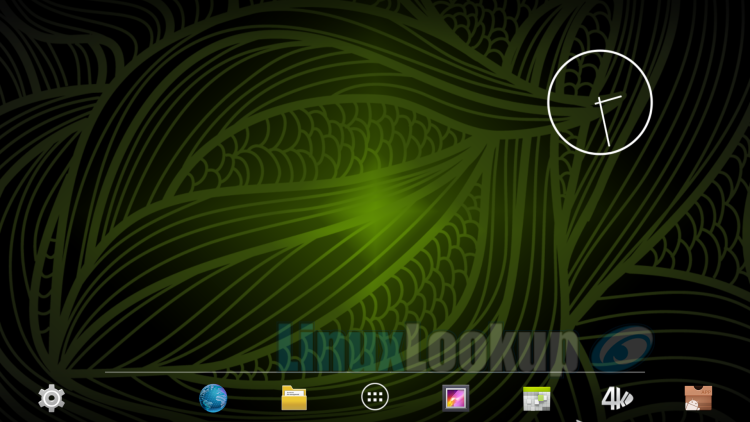 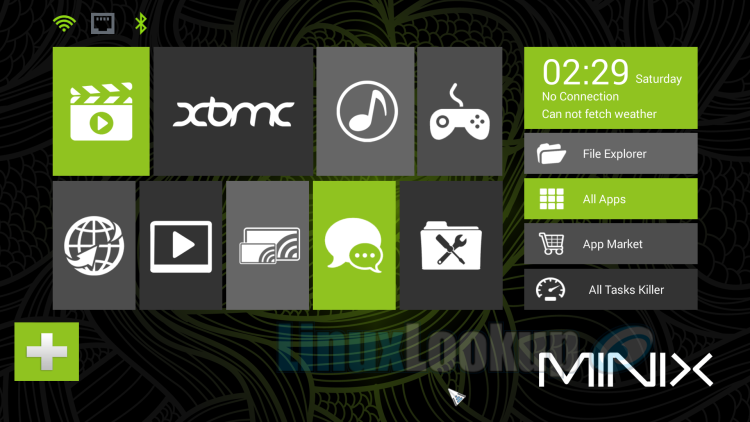 MINIX Metro takes design influence from Metro, a typography-based design language by Microsoft. The interface is straight forward and layout works great for Television format. Eight of the nine predefined categories allow for easy addition & removal of Application shortcuts to their associated sub menus. Direct quick launch shortcuts can also be managed and placed directly on the Home screen too.

Overall MINIX Metro has potential, but isn't polished enough for my liking. There is a lot of unnecessary clicking and user experience needs work. It would also be nice to see some configuration options such as color scheme, custom icons and button assignment. My recommendation would be try out both Launchers to see which you like best, or search Google Play for other options. For the record, I saw nearly an identical interface on a competitors Android based device, this leads me to believe MINIX Metro may not be exclusive to MINIX, rather a re-branded Launcher. 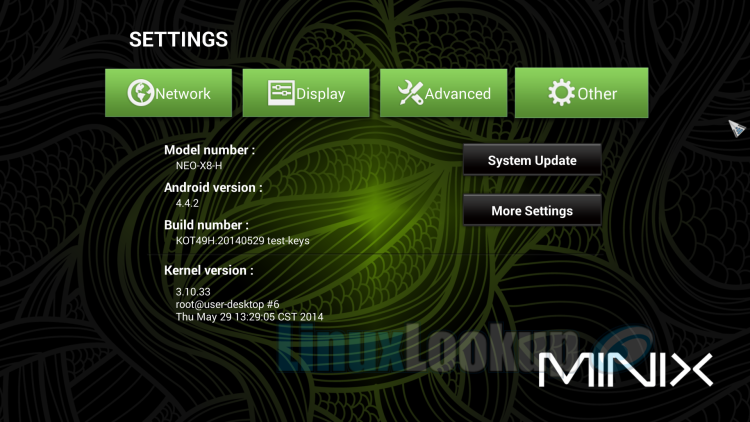 Pre-installed are popular applications such as Netflix, Skype, Gmail, Google Maps, AirDroid, Miracast and custom a build of XBMC. Complete access to Google Play is available to download all your favourite Android Apps too. There is no needless bloatware installed from what I've observed, just a clean Android environment with a good mix of the essentials. 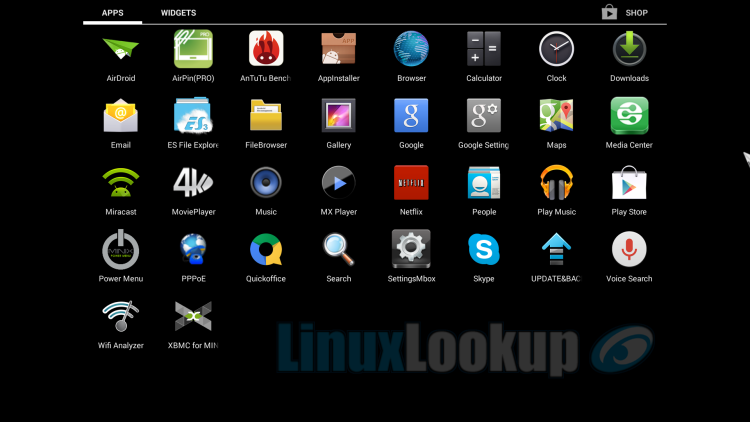 For those unfamiliar, XBMC is an Open Source home theater application which is freely available for Linux, Mac/iOS, Windows, Raspberry Pi and Android. Though I've been using XBMC software on Linux for nearly a decade, this was my first experience running XBMC under an Android operating system.

At the moment XBMC isn't available through the Google Play Store, but official APK packages can be downloaded directly from the project homepage. Nevertheless an unnecessary step as XBMC MINIX Edition comes pre-installed. This custom build is based upon the current stable release of XBMC 13.1 (Gotham) in partnership with the developers at XBMC. Modified to provide the optimum experience and boasting the world's first true 4K Ultra High Definition (UHD) XBMC player on Android, it is highly recommended keeping this installed version. 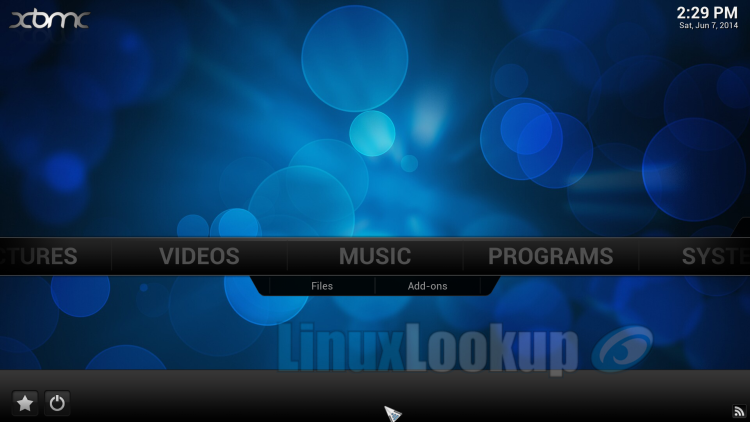 XBMC takes a bit of time to configure and customize, but in the end, your efforts will be rewarded with an outstanding entertainment center. 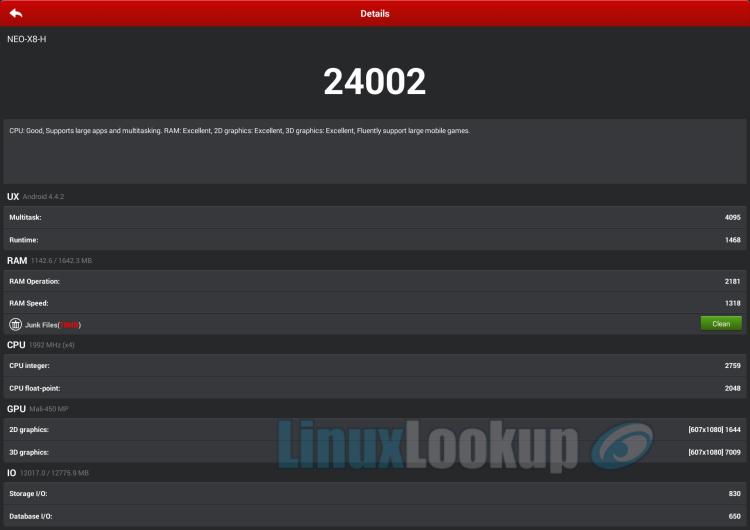 Results of testing the graphic processing performance, frames per second are as follows. 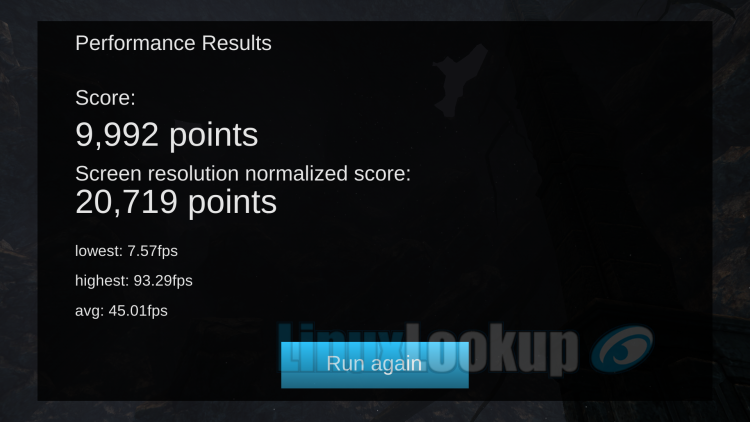 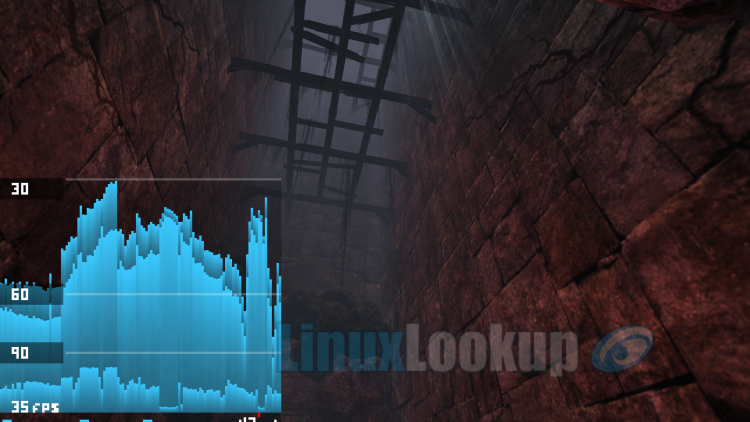 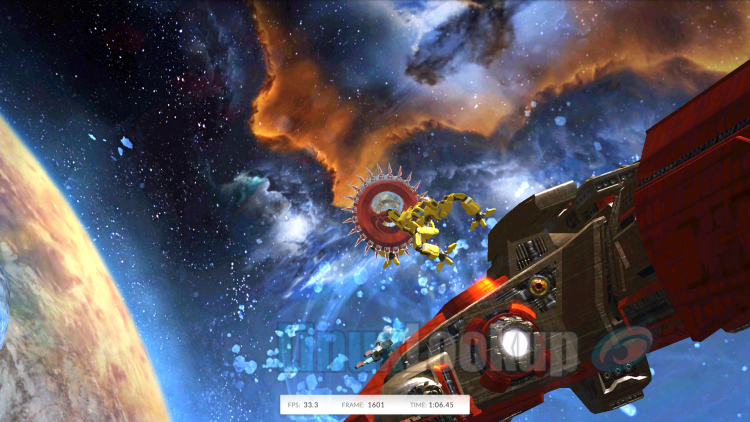 4K Ultra High Definition video is years away from being mainstream and unless you have a television/monitor capable of supporting 4K resolutions there really isn't any benefit. But for the sake of evaluation I've confirmed the MINIX NEO X8-H is capable of 4K playback. Performance was good over Local Area Network (LAN) to Network Attached Storage. I tested on both a WiFi and Ethernet connection with mixed results. As expected, WiFi experienced issues with buffering every 16 seconds, which isn't enjoyable viewing. Ethernet on the other hand had an initial 35% buffer and played seamless from that point forward. For the record, buffering was not present in my 1080p video tests. 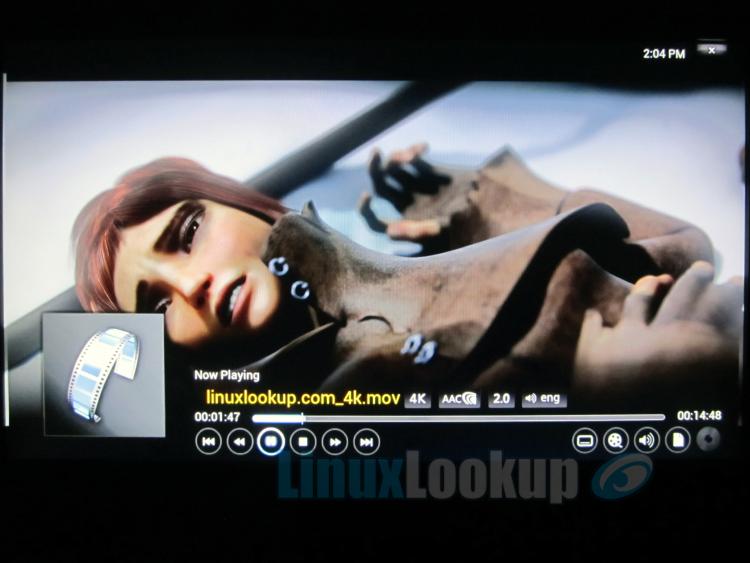 For some reason Android refused to capture the frame buffer on screenshots in XBMC so shown above is a photo taken of my TV playing 4K video. Note the 4K icon.

Our energy efficiency test measured power consumption under heavy load fluctuating between 3.5W to 6.0W, idle fluctuation at 2.5W to 3.1W and stand-by (sleep mode) fluctuation 2.2W to 2.5W. Your results may very depending on system load. 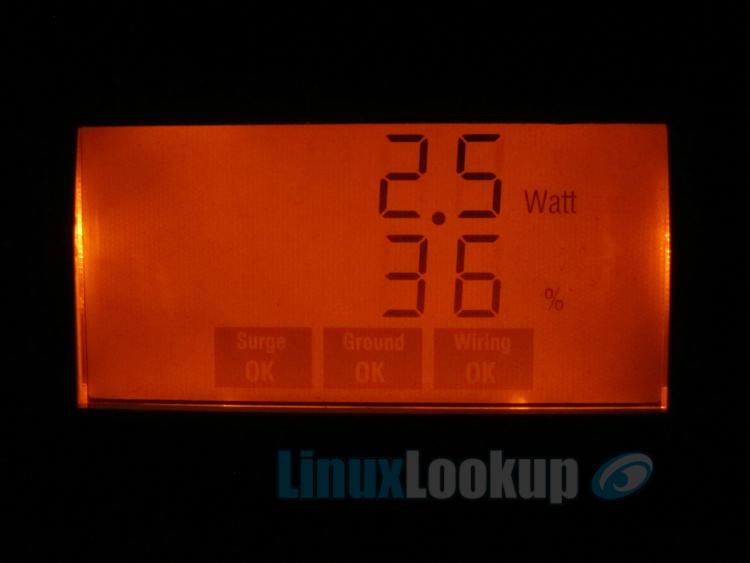 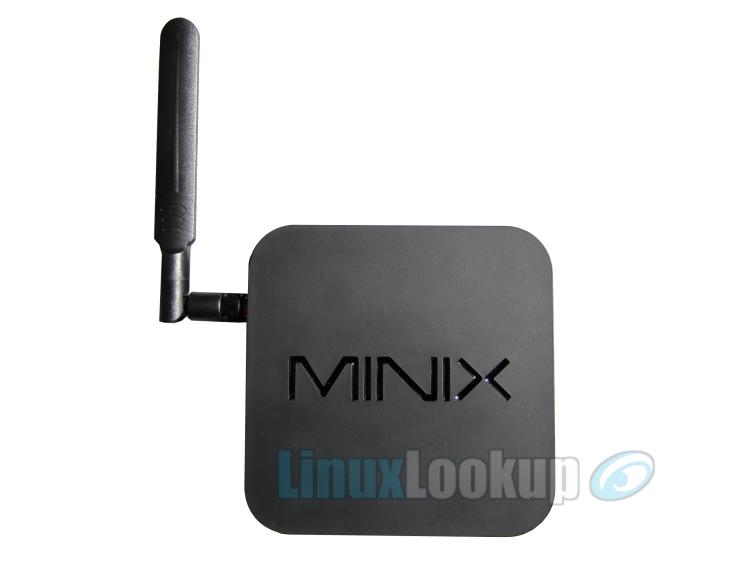 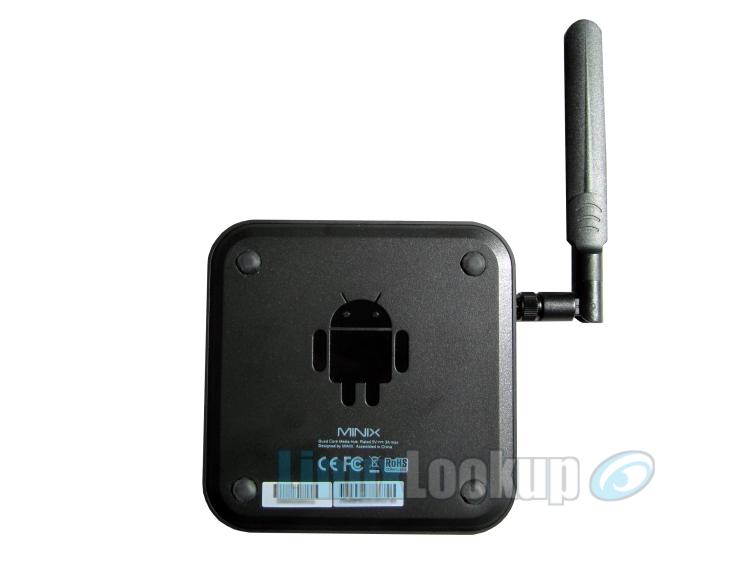 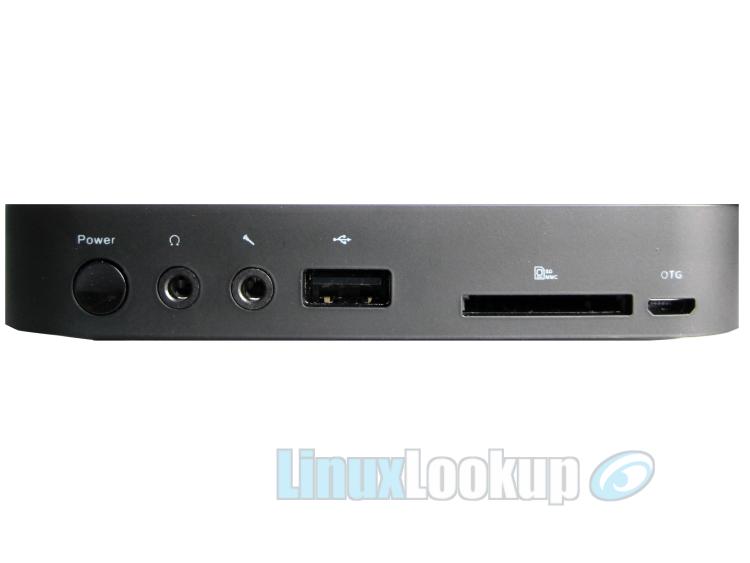 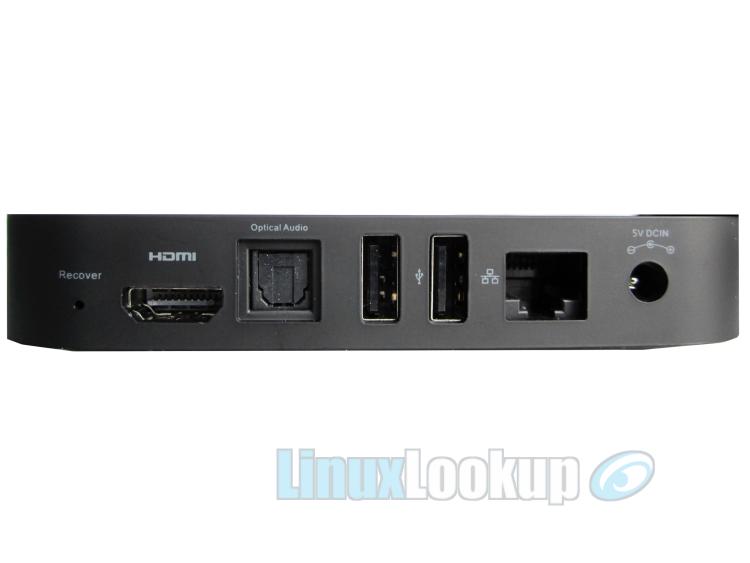 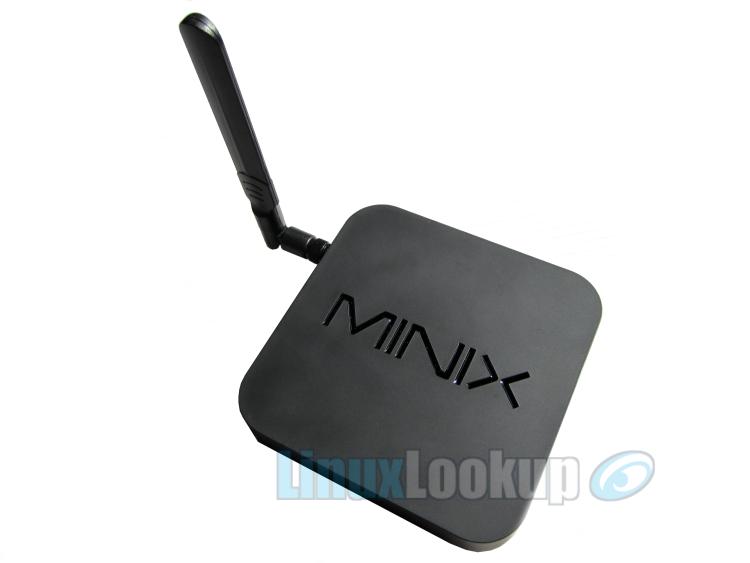 Assuming the two software bugs discovered will be fixed in the near future and aside from my constructive criticisms regarding status indicator, remote power-on and MINIX Metro there really isn't anything negative to say about the X8-H.

A hardware upgrade being the biggest change over the previous generation (X7/X7s), this new hardware configuration exceeds the performance needs of a media center and the price is right. So, if you're in the market for an Android based Media Hub, consider adding the MINIX NEO X8-H to your shopping cart.

UPDATE: MINIX has informed me that the Google Play and Weather App bugs have been fixed in an upcoming firmware to be released later next week, I'll test and report back.