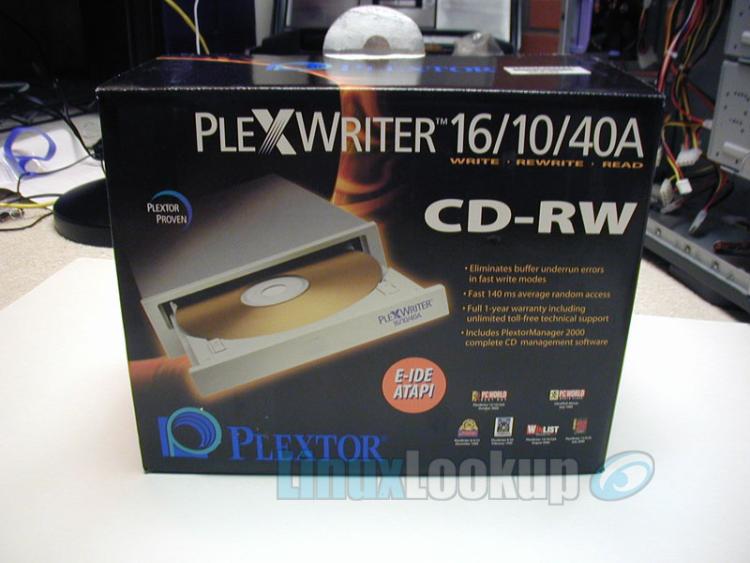 Boasting a staggering speed of 16x, the PlexWriter PX-W1610TA is a far cry from yo momma's first generation 2X CD-RW optical devices. Plextor has once again regained its crown of "king of the hill" by having the fastest ATAPI CD-RW drive on the market to date.

This 16 x 10 x 40 re-writable drive is capable if ripping an hour of audio in fewer than 5.7 minutes on average! This review was on the back burner since Mid-March and I apologize, but I encountered some unrelated technical difficulties with some hardware, which detoured completion of this review. Though information and opinion within this review are dated 03/07/01, it still is applicable to current date and I stand by my opinion of "Best ATAPI burner out there!".

On the back of the drive, you will notice something interesting: The addition of an extra fan. This *extra* feature is *need-ed* to keep the drive cool when used in a high temperature environment or writing up to 16x. The fan only seems to run when the CD is working which is good, since it reduces any unnecessary acoustics. While newer controller chipsets are much more efficient then the ones in the past by absorbing less power and generating less heat, Plextor seems not to be taking any chances with this new fan addition. Even though I didn't notice any excessive heat during my evaluation.

What's in the box?

BURN-Proof was created by Sanyo and stands for Buffer Under RuN error Proof. Like many other manufacture these days, Plextor has licensed Sanyo's popular BURN-Proof technology to help prevent Buffer Under RuN Errors. Once a Buffer Under Run Error has occurred, the disc cannot be read by a CD-ROM or in the worst case, the disc will be useless (a coaster).

The BURN-proof technology now enables many CD-R/RW drives to record data seamlessly between the end of one recorded point and the start of another recording point, even though data transfer may be suspended due to the occurrence of a Buffer Under Run. If you have a slower computer or want to multitask while writing and not create coasters then BURN-Proof is the ideal solution for you! How does it work you ask? With older drives, when the data stream would be interrupted between the source and CD-RW you would get an error. When the buffer under run occurs the drive will stop writing and store its write data and then wait. With BURN-Proof the CD-RW will wait until the data stream can resume. When the computer can resume its data transfer it will reconnect to the drive. The drive will then have to sync up, find the end of where it stopped writing and then continue writing. The BURN-Proof feature connects the data seamlessly between the recorded point and the recording start point with this high technology. The accuracy of data read can be affected by the media condition or quality. Therefore, in some cases of media condition or quality, the error may occur because BURN-Proof feature cannot connect the data correctly.

What did I use to burn? Good question, my favorite has to be cdrecord-1.9. Please keep in mind this is command line utility, which requires a little user interaction (obviously). Cdrecord supports BURN-proof (Buffer under run technology that was explained earlier) including cdda2wav and mkisofs/mkhybrid in source tree.

Note: mkhybrid can be used to make CD images that are usable on both Windows and Mac platforms. For those of you with the thirst for knowledge, I would suggest you read this "ATAPI CD-Recorder tips" document. as it explains ATAPI-SCSI emulation. Be sure to use cdrecord-1.6 final or later, it includes the modifications needed for ATAPI drives and in the case of the Plextor PlexWriter 16/10/40A this is an obvious necessity.

If for some reason you still use Linux Kernel version prior to 2.1.73 or prior to 2.0.35, be sure to upgrade to something a 'little' more recent before you try to compile and use cdrecord. With the newer 2.2.x or 2.4.x kernels it seems to be possible to run SCSI/ATAPI host adapter emulation and generic IDE at the same time by selectively telling the kernel what to use for which drive. However, this would not be needed if the Linux SCSI CD-ROM driver would be more up to date and supports standard conforming drives. If you're more inclined to a GUI (Graphical User Interface) you may want to check out one of the following. Keep in mind a front-end is a front-end under Linux, regardless. That means, you still have to install the command-line utilities, but functionality is presented in a user-friendlier manner.

Having said that, here are my suggestions: X-CD-Roast is a program package dedicated to easy CD creation under Linux. It combines command line tools like cdrecord and mkisofs into a nice graphical user interface. http://www.xcdroast.org/ This would be my first selection for graphical front end for cdrecord. GToaster is another GUI cdrecord/mkisofs/cdda2wav front-end for creating data, audio and mixed mode CD's both from other CD's and from self compiled data.

Tip: For all you Debian users, just do an: apt-get install gtoaster BurnIT is a JAVA front-end to cdrecord, mkisofs and cdda2wav-0.95 making it a complete package for burning CDs on the Unix platform (May require JAVA 1.1 compiler). It is available from: http://sunsite.auc.dk/BurnIT/

Typically Plextor drives are modestly elevated in cost compared to the competitors, but like anything in life you get what you pay for, right? Though the difference in cost vs. a comparable drive doesn't exceed more than $50, it may play a roll in decision making with cost savvy consumers.

Like analogies? Well let me put it in perspective this way: You can't rationally compare hotdogs to prime rib! In my opinion the Plextor PleXWriter PX-W1610A is well worth the investment. Spend the few extra dollars and get yourself premium performance.