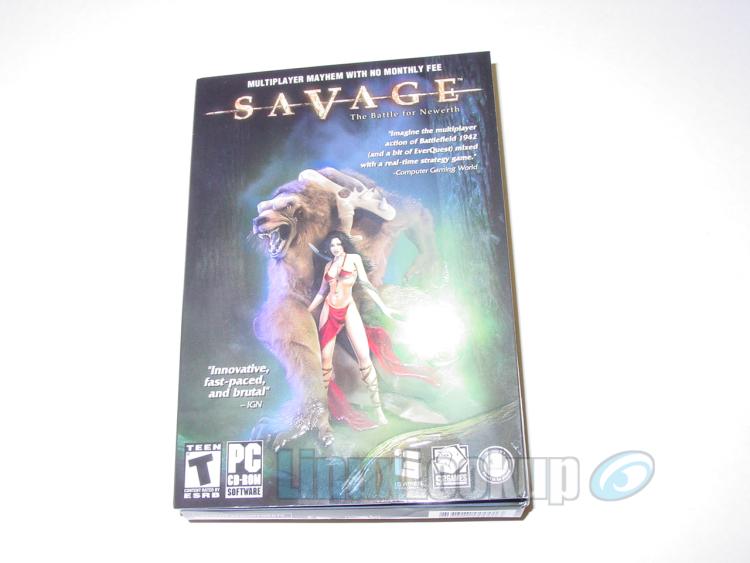 As far as I am aware, Savage is the first title to attempt an amalgamation of two popular existing genres - Real Time Strategy & First Person Shooter. The question to pose is this: Savage - success or mess?

As already mentioned, this is the first game which attempts an amalgamation of two existing game genres - Real Time Strategy & First Person Shooter - not by "merging" the two genres into one, but rather by including both genres in a single game. I was confused too. Prior to obtaining a copy of the complete game I had heard lots of positive comments regarding the title, so I decided to try out the demo version.

To my dismay the demo refused to start, in fact it not only refused to start - it screwed up my X server too... Needless to say, I wasn't holding my breathe as to how many problems I would experience with the release version. Basing a game on a new control system or graphics engine is a difficult step - basing a game on a new genre is often madness! I was more than a little interested to see how Savage would work out.

The game's installation was a breeze, plain and simple - the included CD had a Linux installation application included. No problems thus far. So the game installed with ease - surely there will be some terrible problems when running the game - after all this is Linux, right? Wrong. I ran the game with absolutely no problems, the game has an automatic 'detect-and-patch' system like many others now-a-days, meaning the game was automatically updated to the latest release version with no interference from me. Fantastic. After the game had installed all available patches I was ready to go - so let's see just how good this title is...

The idea of a hierarchical command structure in a game is nothing new - even though Savage only has a 2 tier command structure, a command structure still exists - there is a leader and they have their minions. The commander is in charge and can issue commands to any body in their control, though like the leader of any group you must inspire trust in your men (or women) - without trust they won't follow your orders!

Due to the complexity of the Real Time Strategy side of the game I could probably discuss the concepts of resources, man power and battle strategy for many pages. But I won't, because that would be (even more) boring. I think I have already said enough about the strategy side of the game (and this is only my "First Impressions"!) so I think I will just finish up with this, team work is quite possibly the most important part of Savage, even though the Real Time Strategy element dominates the First Person Shooter section.

Savage is great fun to play - there's no doubt about it. It's incredibly addictive and lots of fun. The strategy & tactical elements of the game make it far more than a simple FPS - I would try to compare Savage to another related game, but as previously mentioned this game is practically in a genre all it's own. Like all titles, when first released a game has problems, some worse than others.

Savage seems quite stable so far, I've yet to find any "show stoppers" that would have anyone screaming for the blood of the developers... though some may exist. For me, there was one problem above all that stood out - lag. Any gamer that has played on-line knows how lag can effect your game play. Lag is not as much of a problem with more recent games as the use of broadband internet connections are becoming more common. It does however, appear to be a big problem with Savage.

The first time I played Savage I thought that the commander could drag their minions and force where they moved - I was wrong, the effect I experienced was due to the multiplayer lag and the game became unplayable. I can only assume that the problem arose when the game's player prediction tried to cope with high ping times. Thankfully there are almost always low ping servers available, so this problem is really just a minor annoyance.

As of yet I have not noticed any problems with sound playback with Savage - so for once I have nothing to complain about - the game sounds wonderful. The ambient and atmospheric sound is excellent and manages not to conflict with the commands you receive, nor with the sound effects created (e.g. from fighting, mining etc.).

When commands are issued from the commander your orders are clear, a "godly voice" issues them and it is always (or near always) obvious what you should be doing - or at least what your commander wants you to do. That's right, you are not obliged to obey your commander, although success often lies on a commander - or more accurately on their minions trusting and obeying them.

Savage is gorgeous, absolutely no doubt about it. The landscape, the scenery - even the characters (or minions if you prefer) are beautifully modeled, textured & rendered. The polygon count isn't so high that your computer will be brought to a crawl (check the minimum requirements), though your frame rate will vary considerably depending on what you are looking at (as is expected!).

There is however, an annoying bug in the landscape rendering (which is possibly Linux and/or nVidia specific, although I have no way to check this) which does not align the landscape triangles quite right - in short partial dashed black lines appear where the triangles should connect seamlessly. Most people would not give this bug a second thought, I guess that is what comes from being a developer myself!

The patch also features numerous bug/exploit fixes and new gameplay and balance tweaks. In addition, the patch introduces Demo Recording which allows players to record their matches to show friends and document competitions. Download it here. You can buy Savage on-line here. 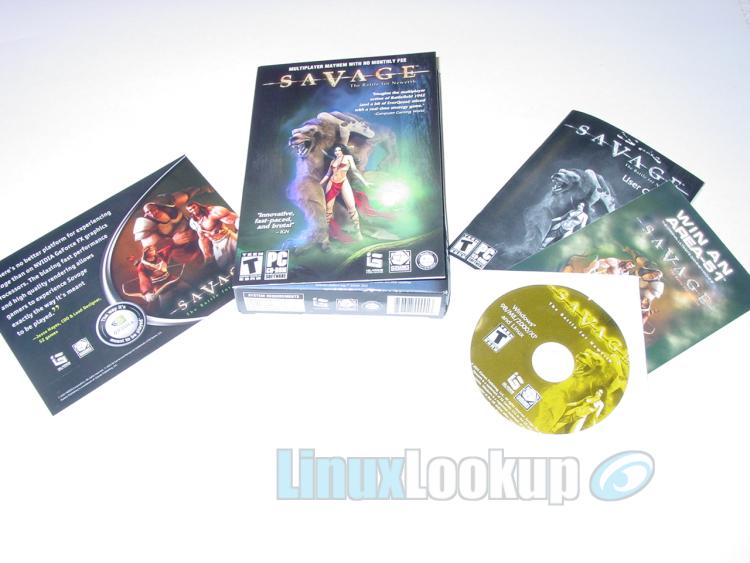 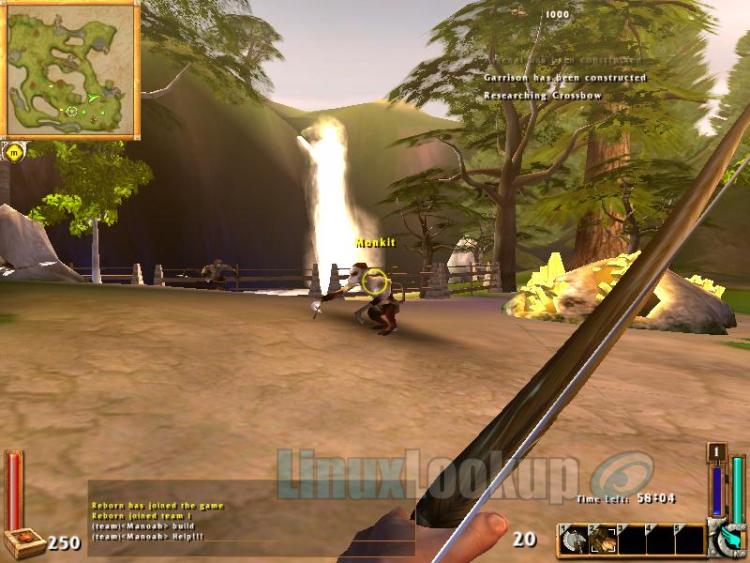 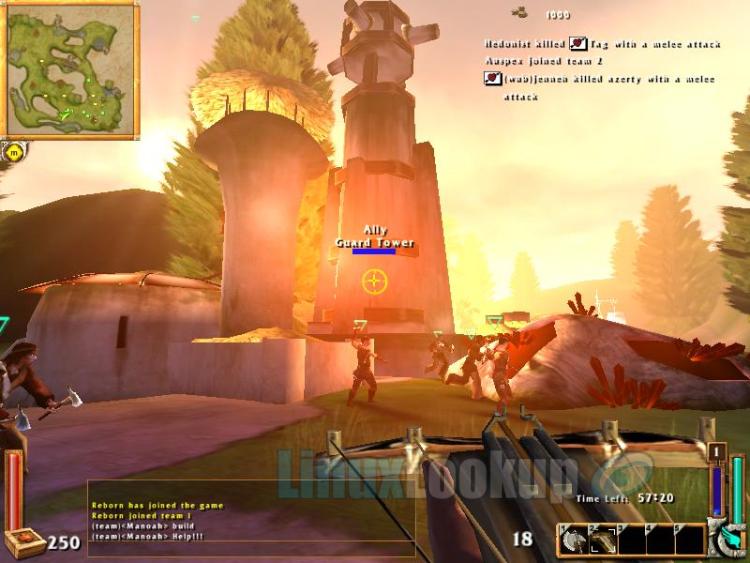 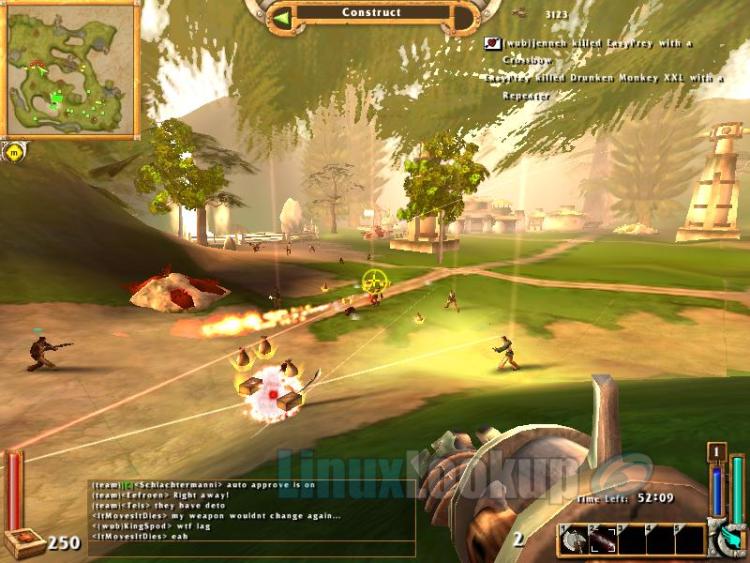 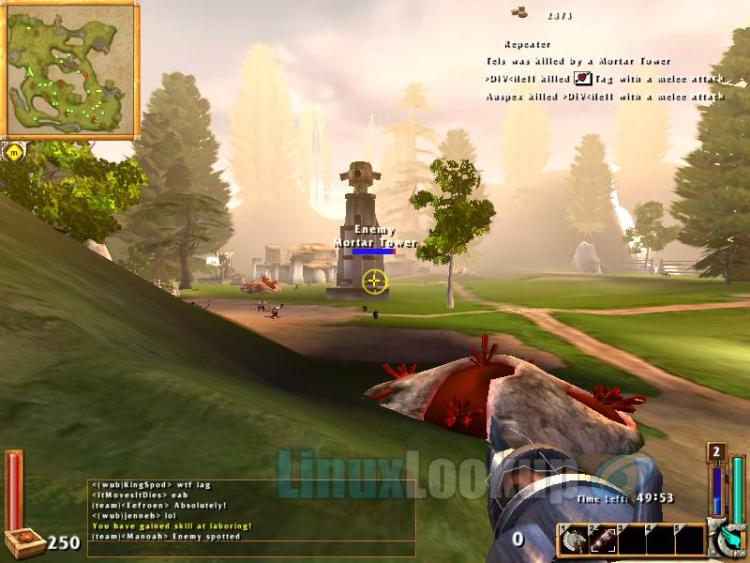 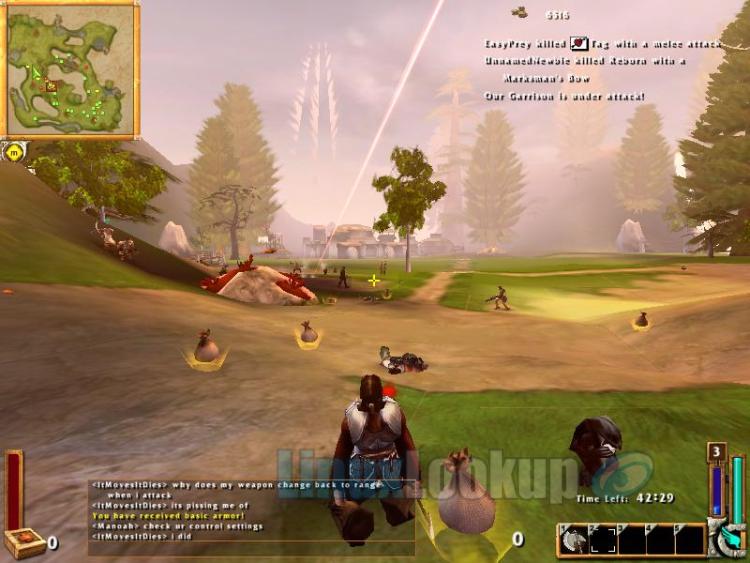 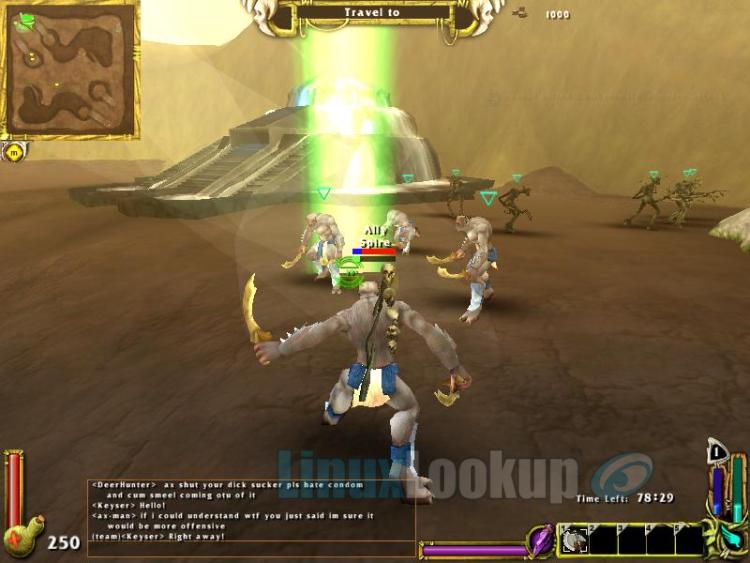 An excellent gaming title - I for one am more than glad to see it released for Linux!