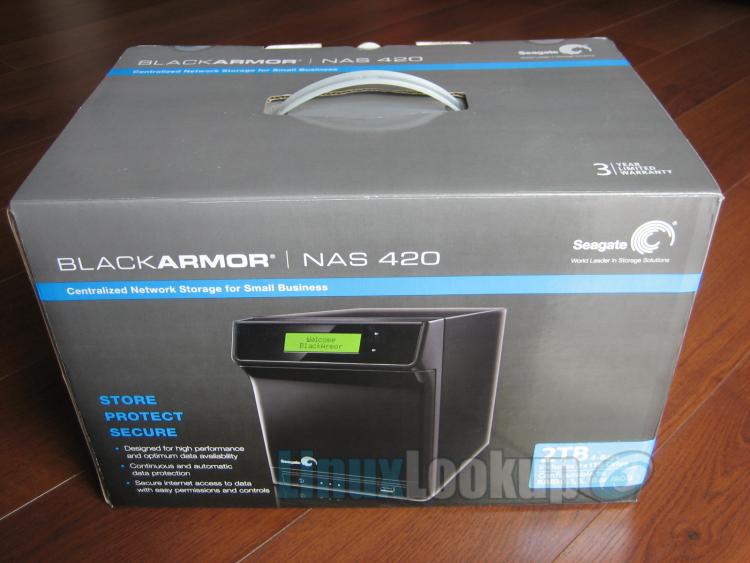 Known for manufacturing storage solutions in the enterprise, desktop, mobile computing, consumer and retail markets. It was only a matter of time before Seagate introduced their very own Network Attached Storage (NAS) product, the Seagate BlackArmor NAS. No, BlackArmor isn't some epic World of Warcraft item to lust over. This is serious business, just as backing up your data should be.

For many of us, our computers have become a critical part of our daily lives. We use them for work, entertainment and even social interaction. Over the course of time, most individuals create a number of files that are important to them or the operation of their business and loosing these would be absolutely devastating. Digital data is now widely perceived as mission critical and a core part of a company's value. Data itself has become the currency of the information age on a global scale, could you afford to loose your files, or more importantly how would you recover?

Data backups are the most effective way to make sure you won't lose those important files. Proactive measures such as incremental or full system backups will help you avoid the situation altogether and Seagate's BlackArmor NAS 420 is the perfect tool to ensure availability, data integrity and continuity for up to fifty workstations.

Here are some highlights: 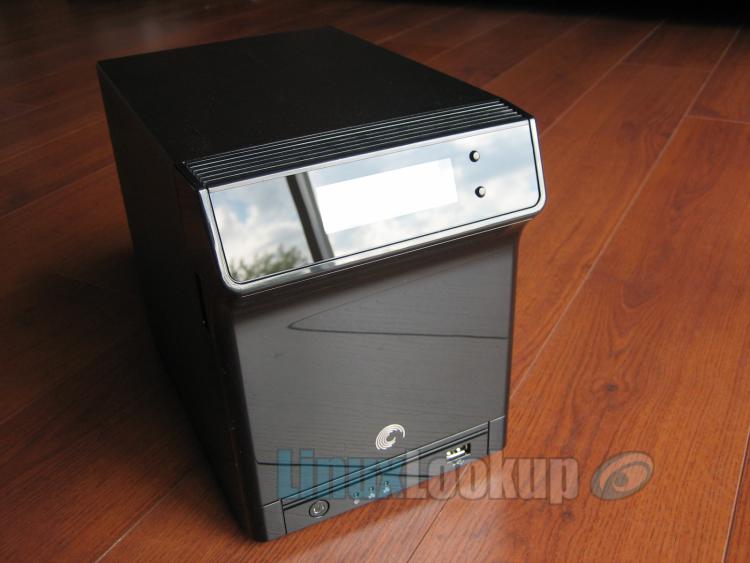 Essentially NAS units are stand-alone computers connected to a network, with the sole purpose of providing a central location for data storage to other devices. Typically these devices have multiple disk drives which utilize Redundant Array of Independent Disks (RAID) technology to provide data reliability. This is referred to as a RAID array. Redundancy is achieved by either writing the same data to multiple drives (known as mirroring), or writing extra data (known as parity data) across the array, thus the need for more than one drive. The Seagate BlackArmor NAS is no different, offering support for RAID 0 (striped disks), RAID 1 (mirrored), RAID 5 (striped disks with parity) and RAID 10 (both striping and mirroring).

Depending on your storage requirement, you may choose from two BlackArmor NAS models. Both the BlackArmor NAS 420 and BlackArmor NAS 440 capitalize on the exact same enclosure, the only variation is number of drives and capacity. Start off with the entry level BlackArmor 420. This unit is populated with two(2) 1TB Seagate Barracuda 7200.11 drives in a RAID1 (mirrored) array, allowing for expansion of additional drives and RAID schemes as your needs grow. Or for those with larger storage demands, the BlackArmor 440 comes in 4-Terabyte, 6-Terabyte and 8-Terabyte configurations employing RAID5 by default. 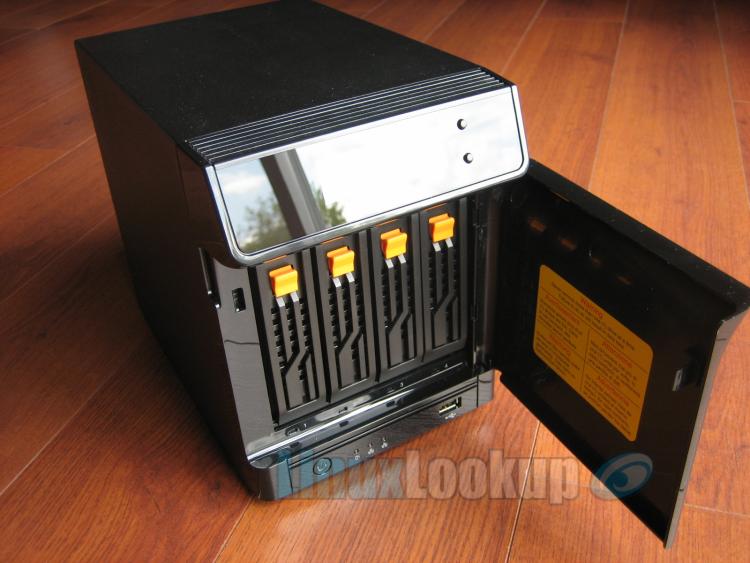 The housing is constructed from a thick gauge metal which seems relativity sturdy in comparison to some of the other NAS units I've used. On the font you'll find glossy plastic door which swings open to reveal hot-swappable drive sleds that accommodate up to four SATA II hard drives (Currently 2TB maximum per drive bay). Located directly under each individual drive bay is a status indicator light. These LED lights are used to help you monitor the status of the drive seated, either good heath or failure. Additionally you can use BlackArmor Manager to notify you by email when the status of the server changes or when a server setting is modified. 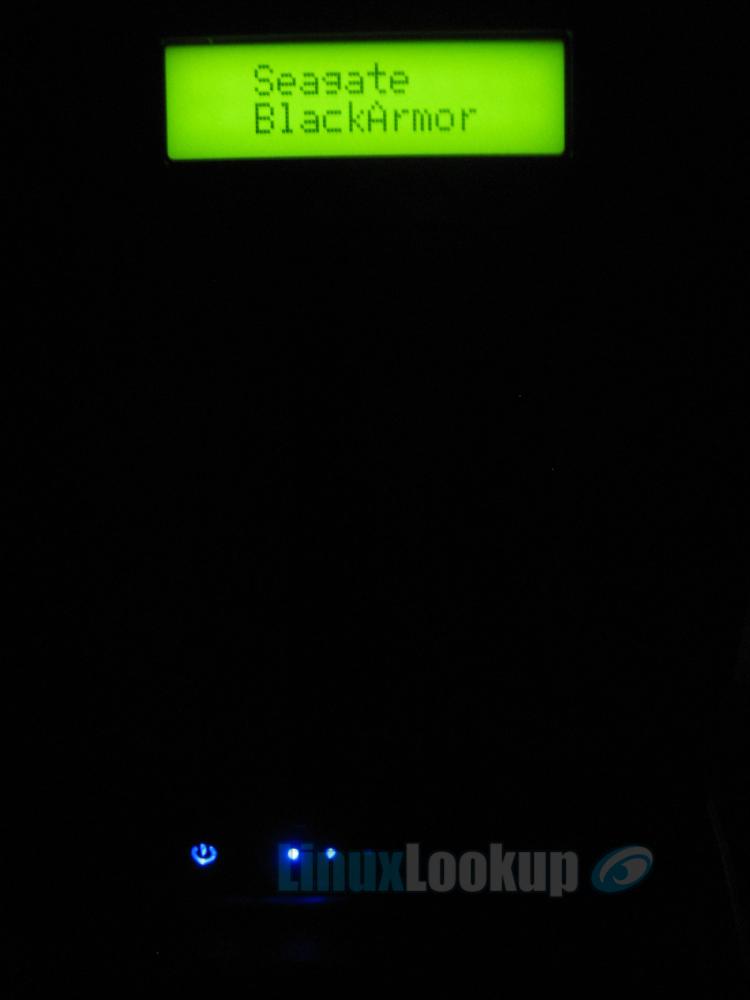 Towards the top of the unit is a monochrome LCD screen. Using the two scroll buttons, you can quickly display LAN-Port configuration and status, domain details, disk drive heath, volume usage, fan heath and RPM, device temperature, event alerts, USP port status and date/time settings. This feature is perfect for at-a-glance information and status checks. My one gripe is that the screen stays lit as long as the NAS is powered on. Would be nice if it shut-off after 10 minutes, or had a disable option. 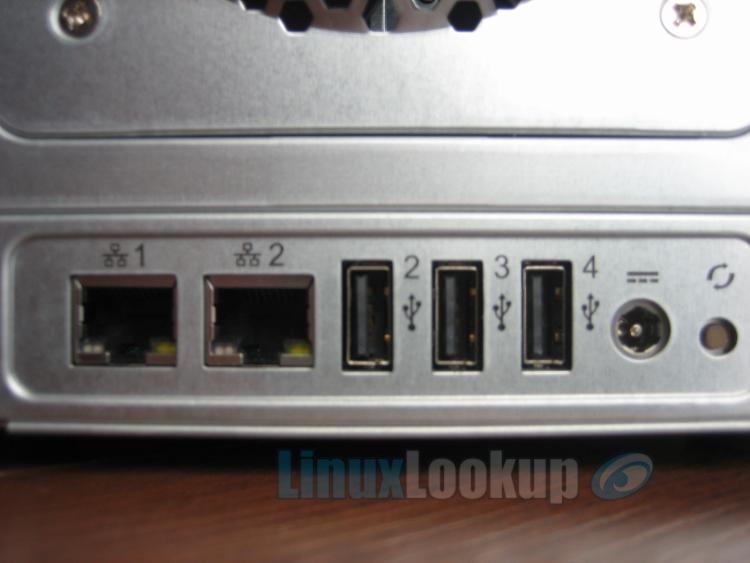 BlackArmor harnesses a 1.2GHz processor, 256 MB RAM and uses an external brick power supply. The advantage to this is a reduction in temperature for both the housing and drives, also it allows the PSU to easily be replaced in the event of failure. For connectivity you'll find four USB 2.0 ports (three on the back, one on the front) and dual Gigabit Ethernet ports for fail-over (link aggregation) or NAS-to-NAS replication. Link aggregation is designed to overcome bandwidth limitations and lack of redundancy, where as NAS-to-NAS replication allows an exact copy of the data on your BlackArmor server is created and maintained on a second BlackArmor server. Network tip: In order to achieve true Gigabit Ethernet speeds, every single component on you network must be Gigabit rated, this includes switches, hubs, network interface cards and even Ethernet cable (Cat5e or Cat6). 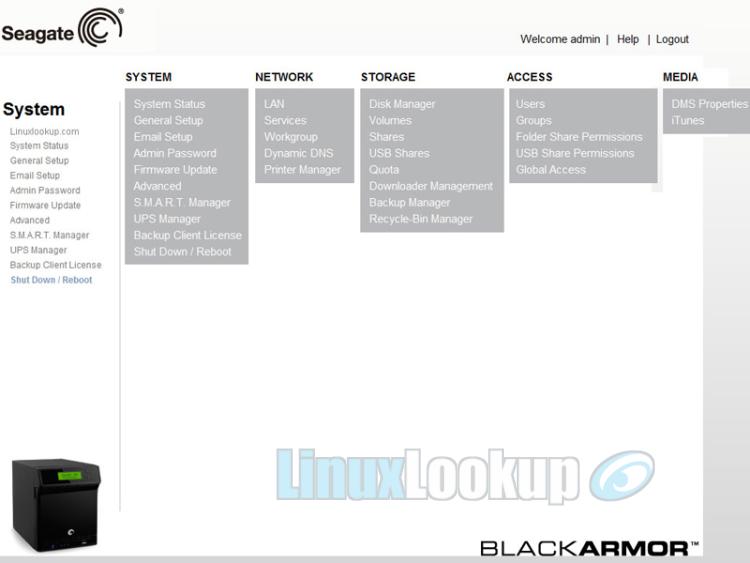 The Seagate BlackArmor NAS has an embedded browser-based set-up/administration panel typical of appliance devices. Built on PHP and Prototype JavaScript framework, the admin panel has an intuitive flow, categorized by function with a touch of AJAX interaction reminiscent of a dynamic web application. Setting-up the device is an effortless procedure. Simply plug the NAS into a DHCP network and give it a moment to be assigned an IP address. From here you'll be able to navigate the administration panel from your web browser. On start-up, the NAS guides you though some brief initial setup configurations. Pretty much ready to be used in under 5 minutes. Configuration options and feature sets are too broad to list, but here is a screenshot of the administration interface with all drop-down menus expanded (Note: The interface doesn't allow all menus down at once, this images depict me tricking it into doing so). 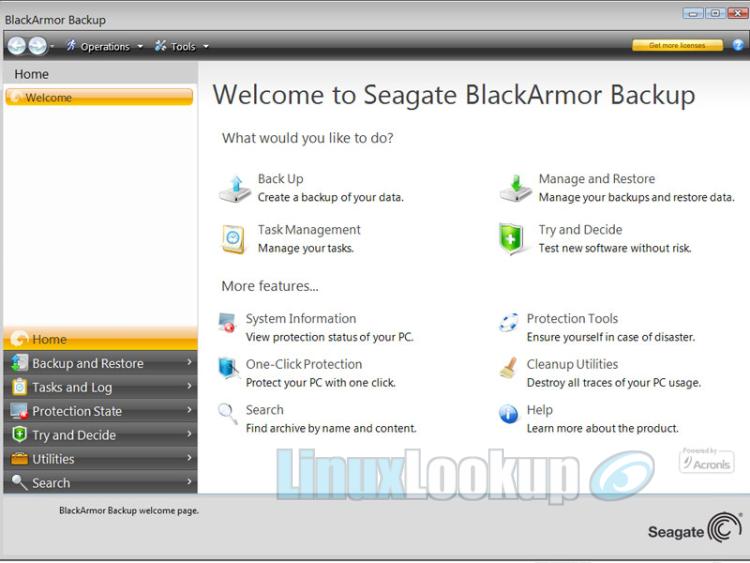 Included are ten user licenses for the BlackArmor Backup Software (Powered by Acronis). This wizard based software package has a long list of backup, restoration, and data-protection tools that allow you to easily backup specific files & folders or application data, create a disk image, and create a backup of your current system state. Manual or scheduled, the software is capable of full, incremental, and differential backups and offers individual files to entire volume encryption. You can restore data by running a restore wizard, either boot using the included CD, or by mounting the backup into a virtual drive and copying data. The software also includes some features unrelated backup, but useful for disk and file management. Unfortunately, BlackArmor Backup Software is for the Windows operating system only.

For Linux I'd suggest using a great user-friendly Open Source alternative such as Rsync, TimeVault, FlyBack or Bacula.

Windows and Mac users can use the included Seagate Discovery software to explore their network for any BlackArmour devices attached and then manage shares. The unit supports HTTPS, FTP, NFS and CIFS file sharing protocols. CIFS started out as an update of the Server Message Block (SMB) protocol for file, printer, port and communications sharing. Windows users will most likely use CIFS to mount their network shares. Being a Linux user, you'll want to log into the administration panel to do some configuration first and then mount your network shares. NFS is the closest thing to a native network file system for Linux and I personally like to use NFS over CIFS.

Note: If you experience difficulties mounting a share, double check you have the default volume (DataVolume/) name in the path.

Another note worthy feature supported is the creation of multiple logical volumes (up to four in total) provisioned with different RAID levels. As RAID technology is used to increase the performance and/or reliability of data storage, each level has their own advantages and disadvantages. RAID-0 is the fastest and most efficient array type but offers no fault-tolerance. RAID-1 has the highest disk overhead of all RAID types and is inefficient, but also offers 100% redundancy of data and means no rebuild is necessary in case of a disk failure. RAID-5 can withstand a single disk failure without losing data or access to data and achieves a good balance between performance and availability. Setting multiple simultaneous RAID levels allows you to configure different volumes based upon their purpose. For example, streaming media off the first volume would benefit from the faster read performance of RAID-0 where as important files requiring high availability could use RAID-5 on the second volume.

This chart defines each application test in greater detail. 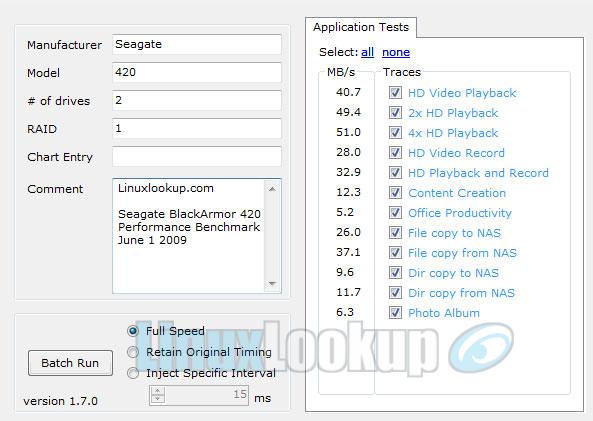 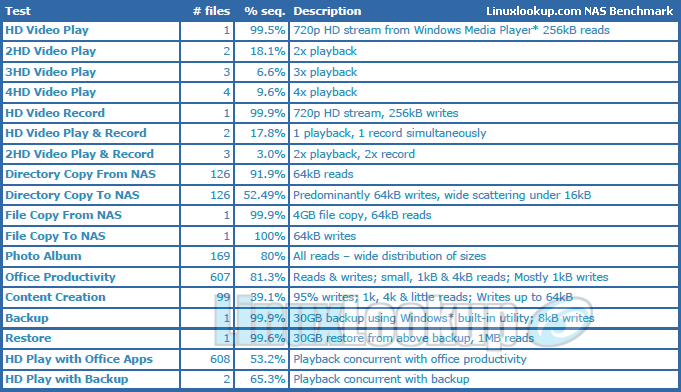 BlackArmor WS 110 Workstation Storage: For small office, home-based professionals or remote staff, the BlackArmor WS 110 desktop drive is a powerful, complete and secure direct attached external storage and backup solution. The dual interface of eSATA and USB 2.0 provide quick access to data. With a piano black enclosure, the BlackArmor WS 110 is designed to lie flat or stand vertically to blend seamlessly into a work environment.

BlackArmor PS 110 Portable Storage: With the BlackArmor PS 110 portable drive employees who travel with business critical files can do so with the peace of mind that their backed-up data is protected. The business-grade backup application coupled with a reliable Seagate hard drive in an exceptionally slim, 12.5mm package, which makes the PS 110 a powerful storage solution for traveling professionals.

Just think about of how things have changed for you personally in the last few years. Majority of households have at least one personal computer, paperless work environments are all the rage, financial institutions encourage electronic statements, record keeping along with income tax claims are digital, books, movies, music and other products we purchase are also evolving. With the exception of my mother, nobody I know even uses photographic film anymore (sorry mom secret is out). I bet todays teenager couldn't even operate the conventional cameras we grew-up with. With everything going digital these days, backing-up the data you value is critical.

Some may argue the Seagate BlackArmor NAS is rather costly vs similar NAS products. The only NAS on par with the Seagate BlackArmor is Data Robotics Drobo. However, the Drobo unit costs around $450, doesn't include hard drives ($200 for two 1TB drives), no bundled backup software, only a one year warranty, and the networking module is an extra $250! Surely this is a no brainer, what you're getting with Seagate BlackArmor is well worth the expense. Besides, can you really put a dollar amount on your data? 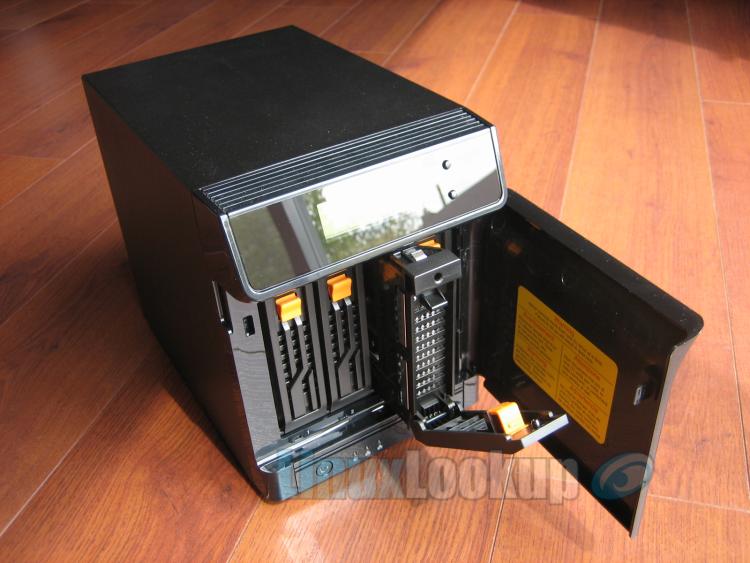 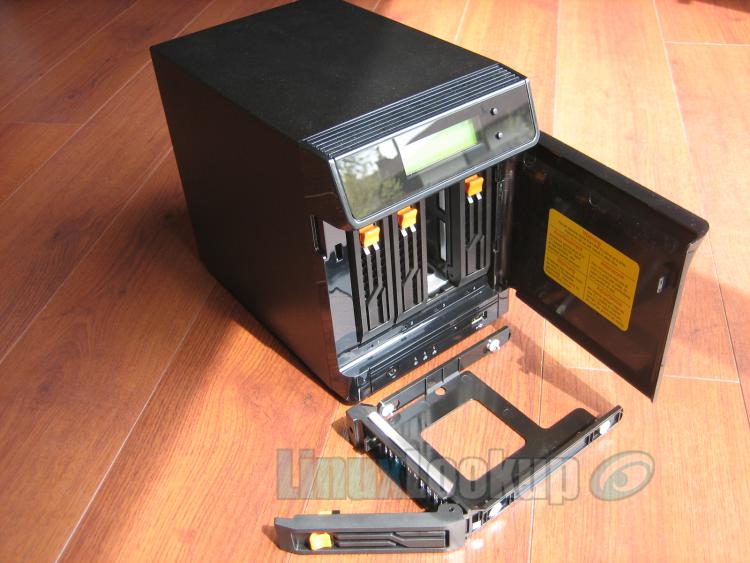 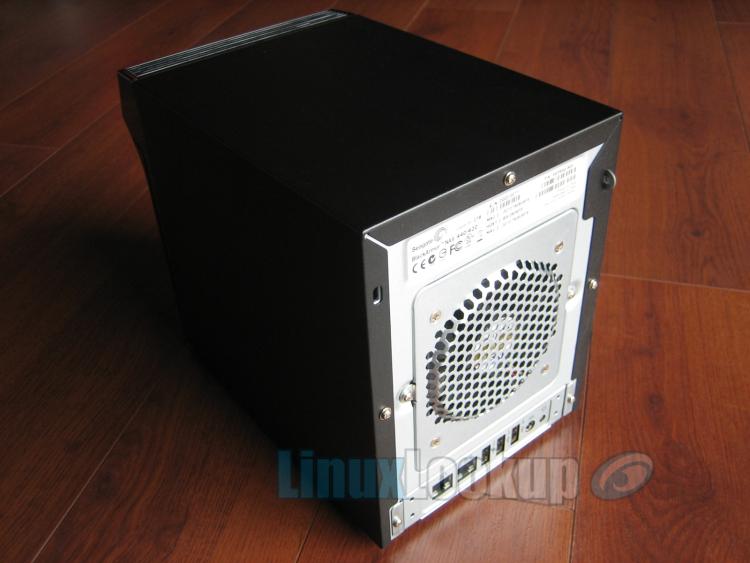 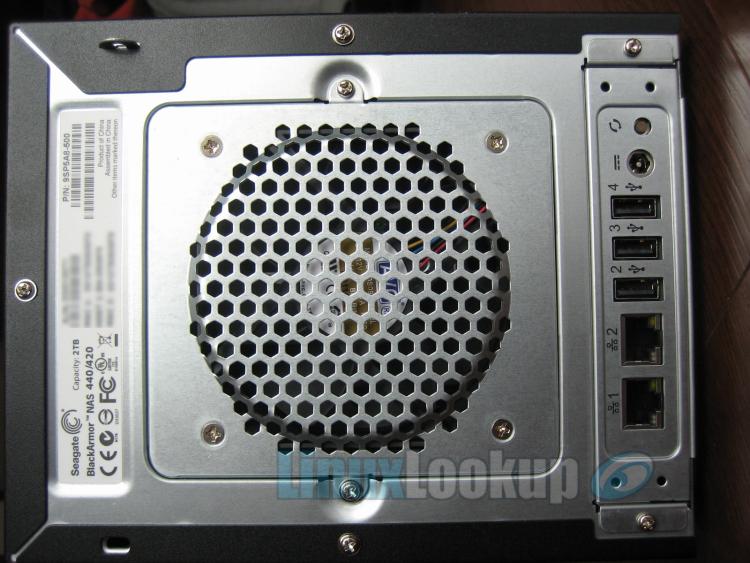 Though Seagate is marketing the BlackArmor NAS towards small office home office (SoHo), business related or personal use, the Seagate BlackArmor NAS 420 offers a level of protection everyone can benefit from. Do yourself a favor and buy one, you've got nothing to lose but all your data!