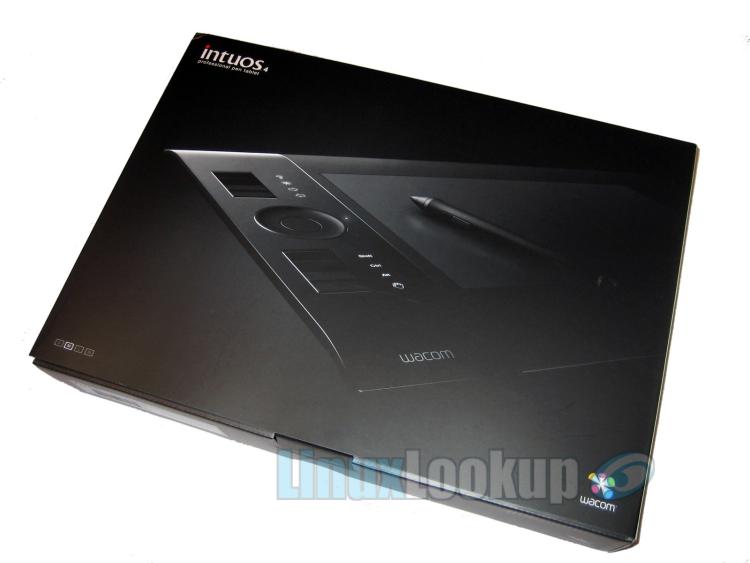 In this review we're going to provide an overview of the product, its features and try unleashing our creative side using Open Source graphic software with the Wacom Intuos4. 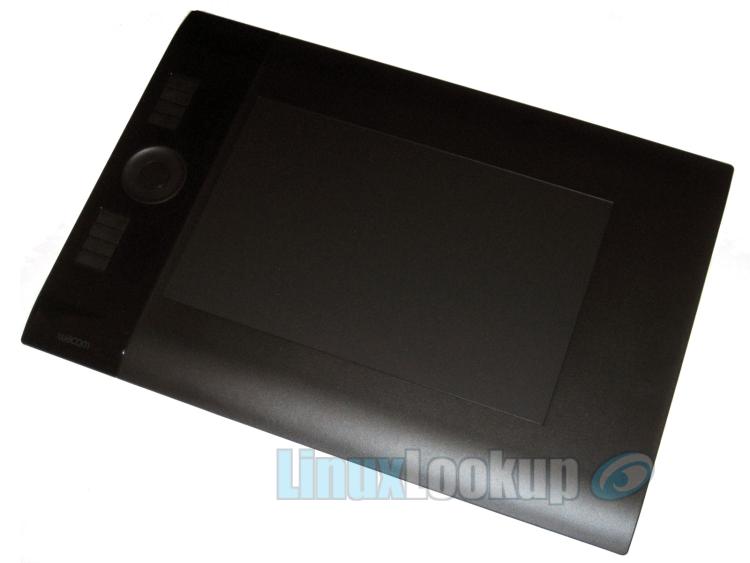 First thing you'll notice is a low profile design that is slim and free of obstruction. The outer housing is constructed from plastic which makes for light weight, easy transportation. Aesthetically the glossy finish looks beautiful, but functionally it is prone to finger prints and highlights specs of dust. On the side control panel are eight ExpressKeys with individual LED indicators and a Touch Ring which controls up to four user-defined functions.

To the touch, the active work area feels similar to paper and is of course centered on the device, separated by only a thin bezel. Overall size and button configuration of the unit will very depending on which model you choose as the Intuos4 comes in four different sizes, small ($229), medium ($349), large ($469) and extra large ($789). Our review model is medium, which provides an 8.8" x 5.5" active area and overall size of 14.6" x 10.0". 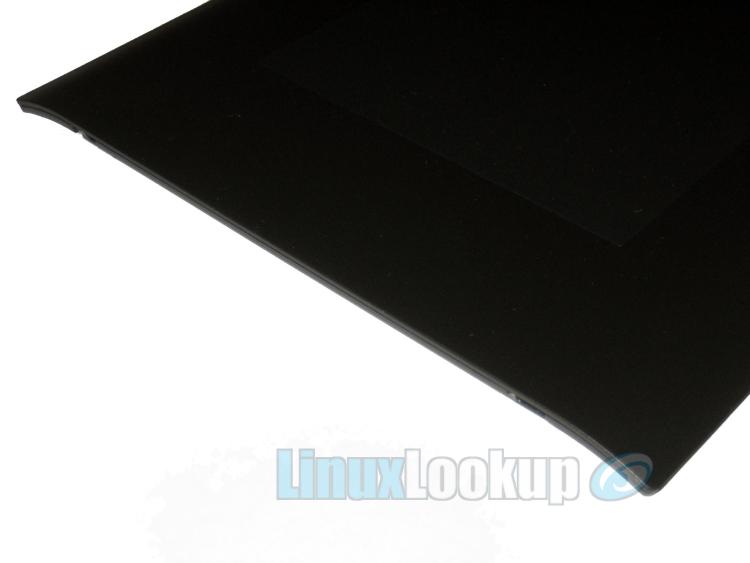 Remember those "special scissors" from elementary school, the ones with green handle? Well those were for people like me, the classroom minority, a left handed individual. I can't begin the explain the frustrations of dealing with right-handed devices when you're a lefty. But if you too are a lefty, you'll rejoice the fact that the Wacom Intuos4 is an ambidextrous device. Simply turn the device 180 degrees, move the detachable cable to an alternate USB port and presto, effortless right or left hand orientation in the matter of seconds. 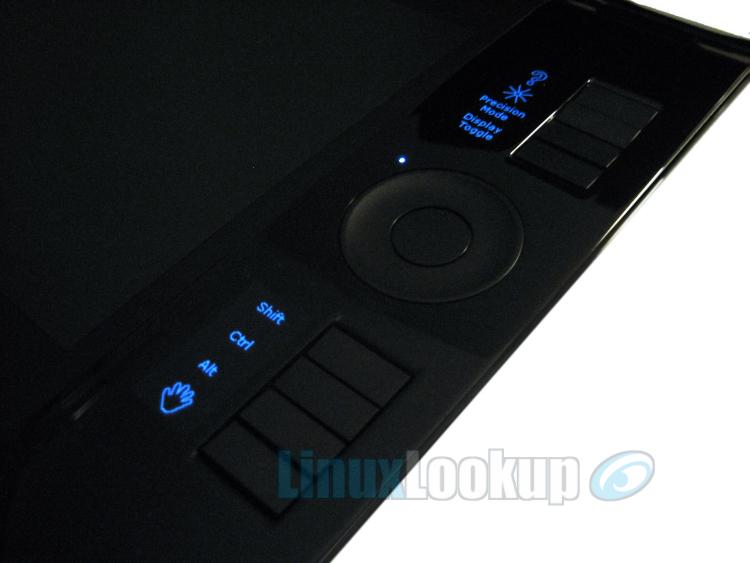 One distinct adjustment over its predecessor (Intuos3) is the grouping of ExpressKeys and addition of a Touch Ring controller. Arranging the control cluster in one area is a huge improvement in my opinion as it transitions symmetrically for both left and right handed users.

An ExpressKey is a shortcut/modifier button you can program for different applications. Each has a corresponding illuminated LED that will display assigned functions. The finger-sensitive Touch Ring is a large wheel interface similar to those you'd see on Apple products. It allows you to control up to four different functions in each application for adjustments such as zooming, scrolling, brush size, canvas rotation, etcetera. 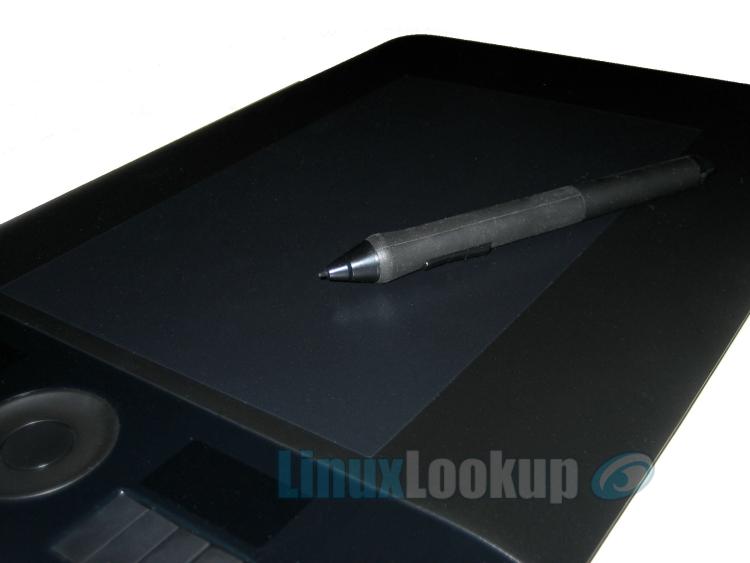 The active surface of the Intuos4 has some traction to it now. Though accurate and responsive, running the pen over feels quite similar to sensory feedback you'd experience when drawing on paper, no longer does the Wacom pen just loosely slide over the drawing area. This is somewhat concerning, as the new granularity may affect life span (general wear & tear) of pen nibs. 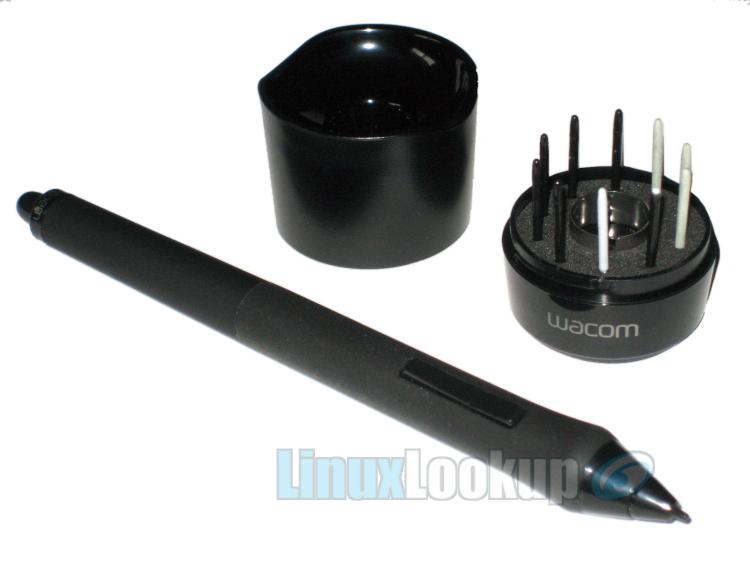 Contour of the new pen is great. It's light weight, comfortable to hold and coated with a rubber grip. There is programmable two-position rocker button and a pressure sensitive eraser on the end too. The nib is sensitive, requiring little pressure to register a response. With 2048 levels of pressure sensitivity it is double that of the previous Intuos model. Included are ten interchangeable replacement nibs (five standard nibs, one flex nib, one stroke nib, and three hard felt nibs) which are handily stored inside the weighted pen stand. Reminiscent of an inkwell. 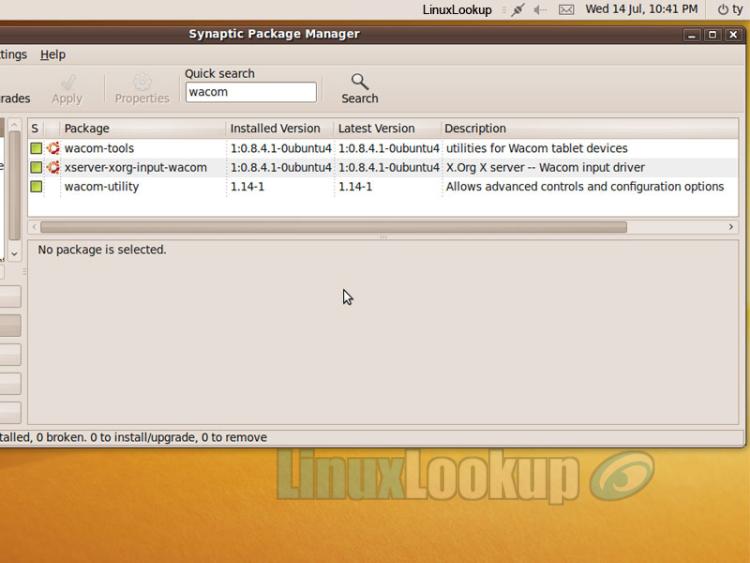 For testing I tired the Wacom Intuos4 on both Ubuntu 9.10 and the current 10.04 release using GNU image manipulation program (GIMP). As far as installation goes, the device was plug and play with interfacing working straight out of the box. Pressure sensitivity for the Wacom pen can be adjusted directly in the GIMP application* and operated as expected. *(Edit menu > Preferences > Input Devices > Configure Extended Input Devices)

The ExpressKey and Touch Ring are a little more tricky to get working though. To enable this functionality, you'll require the installation of a 3rd party driver. Wacom's website links directly to these drivers, but states the following disclaimer: "There is an open source 3rd party driver for Linux that supports Intuos2, Graphire2, Graphire3 and Cintiq as well as older Wacom tablets. Wacom is supporting the development of this driver by providing the programmers with necessary information and sample tablets for testing. Wacom does not control the development of the drivers, and Wacom is not responsible for any quality or performance issues or any potential harm that might occur by using one of these drivers. All support questions or problem reports should be directed to the independent programmers." 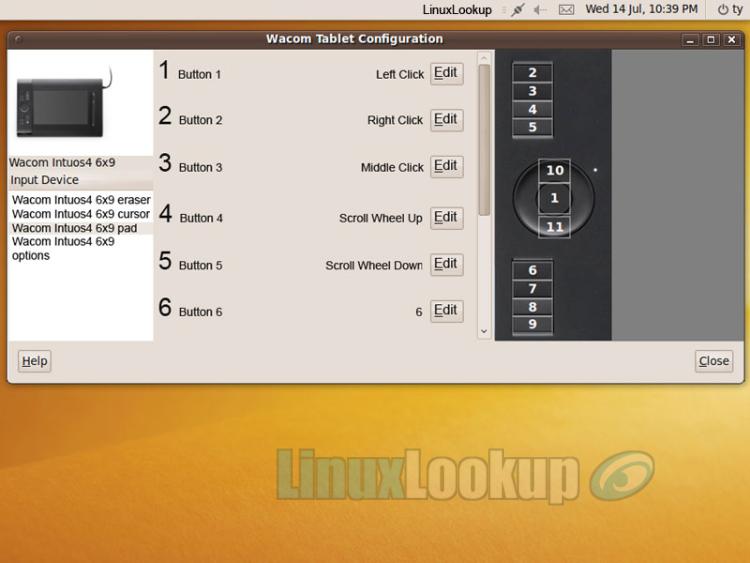 You may download the drivers from The Linux Wacom Project. Just be aware that installing software from The Linux Wacom Project will require you to remove the existing linuxwacom package if your distribution has already installed one for you. Another notable download is a gnome graphical front-end for wacom-tools package called Wacom Control Panel.

When dealing with Open Source software, we sometimes encounter unexplained complications. I spent over an hour enabling all functionality for the device. This of course is not attributed to the hardware, rather software or misconfiguration on my part. The Linux Wacom Project makes a best effort to guide you though setting up your Wacom device, but I found their documentation to be inconsistent and dated. Novice users may find the installation information confusing, but can turn to the official linuxwacom IRC channel for assistance. Software configuration is beyond the scope of this article, so I'd like to keep on track with reviewing the actual hardware, not the Linux software. Numerous resources are at your disposal, just be patient if you don't get ExpressKey and Touch Ring functions working properly first time around.

If this sounds like too much work, or if you'd rather use an application like Adobe Photoshop CS5 for your creative work, I'd suggest setting up a virtual machine to interface with the USB device. For those of you with a dual boot Linux/Microsoft Windows systems, I should mention that Intuos4 products come with a no cost software bundle containing Nik Color Efex Pro, Wacom Brushes 3.0, Adobe Photoshop Elements 8 (Mac or PC), Autodesk SketchBook Express 2010 and Corel Painter Sketch Pad. 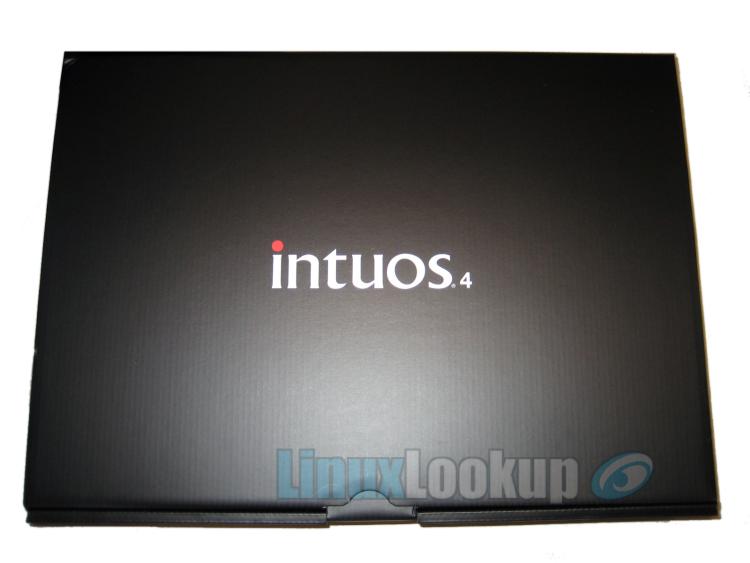 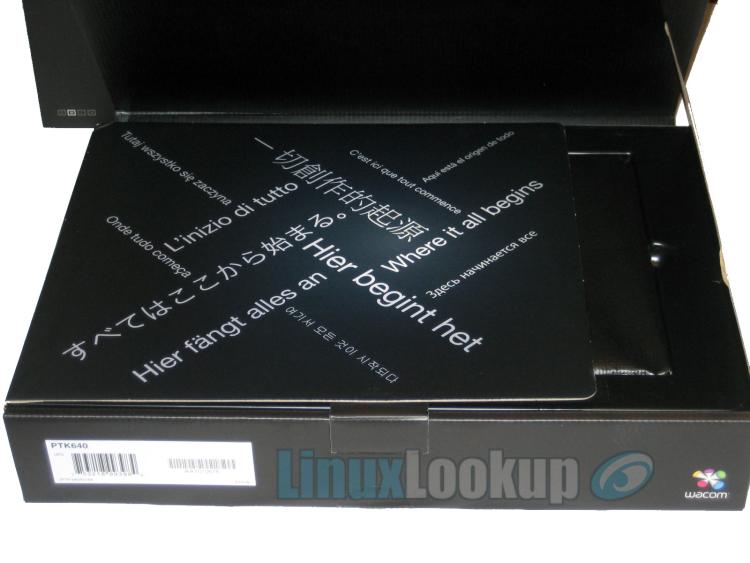 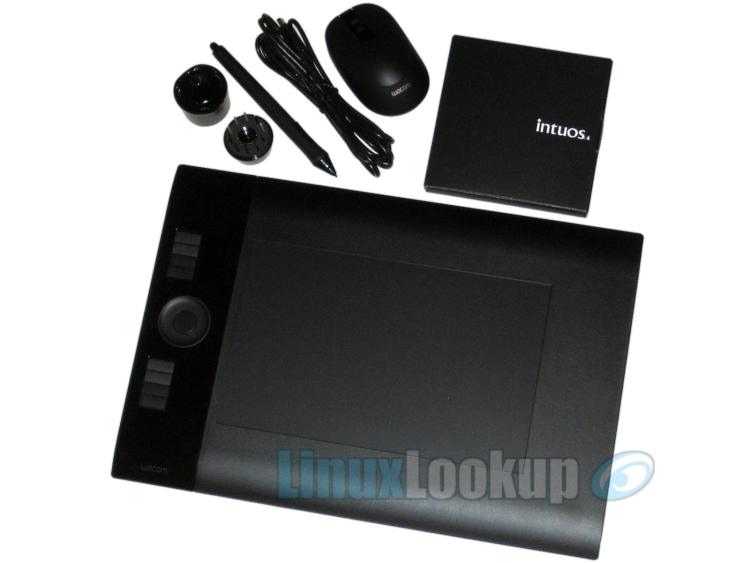 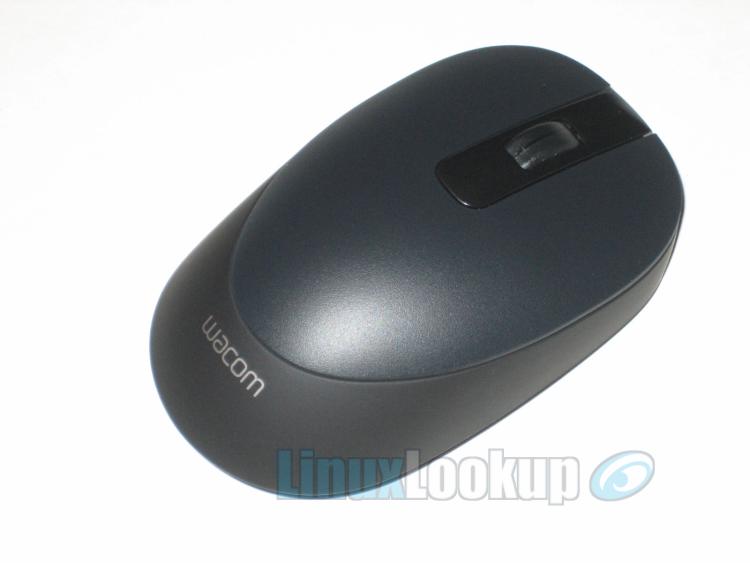 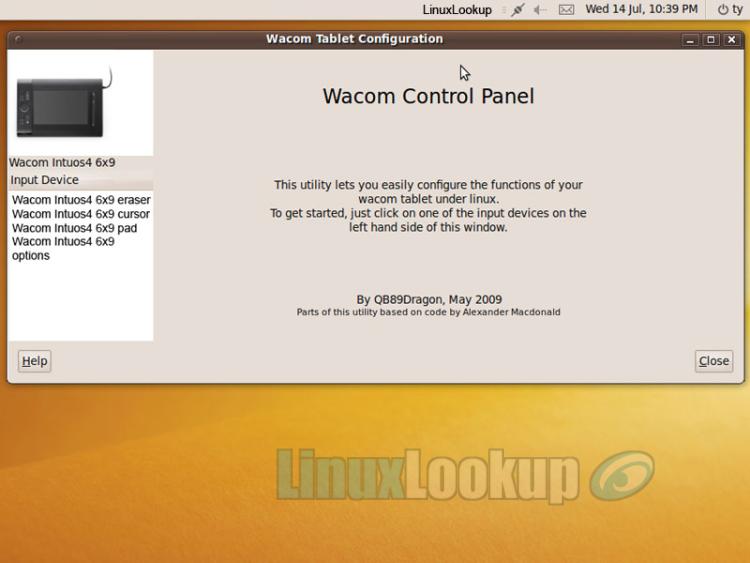 I've spent countless years of my youth freehand drawing using traditional methods. When making the transition to a digital medium, I found the most difficult part was interfacing with a right-handed mouse. If you've never used a graphics tablet, I'd strongly suggest checking out the Wacom Intuos4.

Wacom manufactures a variety of products to meet industry and individual needs. The Intuos4 product line for example is marketed towards professional digital artists. However, I feel that the Intuos4 Medium is a wise choice over less expensive offerings due to the simple mantra of "you get what you pay for". Whether you're a photographer, artist, designer, professional or a creative hobbyist, the Wacom Intuos4 Medium is a well deserved tool.