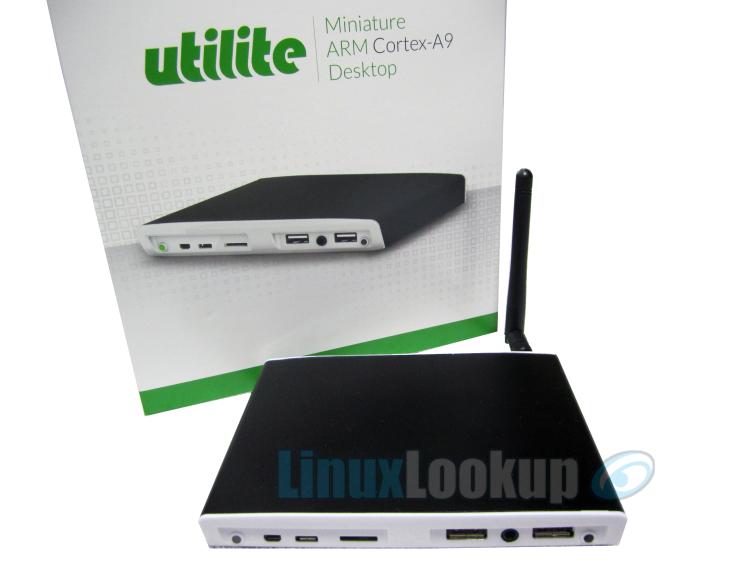 But this device is so inexpensive, surely it cannot really replace my Linux Desktop PC you ask? Let's find out!

Before getting into what the Utilite can do, we need to first examine what's under the hood of this pint-sized Linux Desktop computer. The system comes in three different configurations: Utilite Value, Utilite Standard and Utilite Pro. Each priced at $99, $159 and $219 respectively. These price differentials are of course reflected in hardware specifications. Though all three models are built upon ARM Cortex-A9 architecture, ranging from single, to dual and quad-core processors, slight variations in features are available across models.

Taking the Utilite product line one step further is a premium model, Utilite Pro. Though most expensive of the three, Pro bumps processing power up to a quad-core 1.2GHz CPU and adds a SanDisk U100 32GB Solid State Drive for storage. 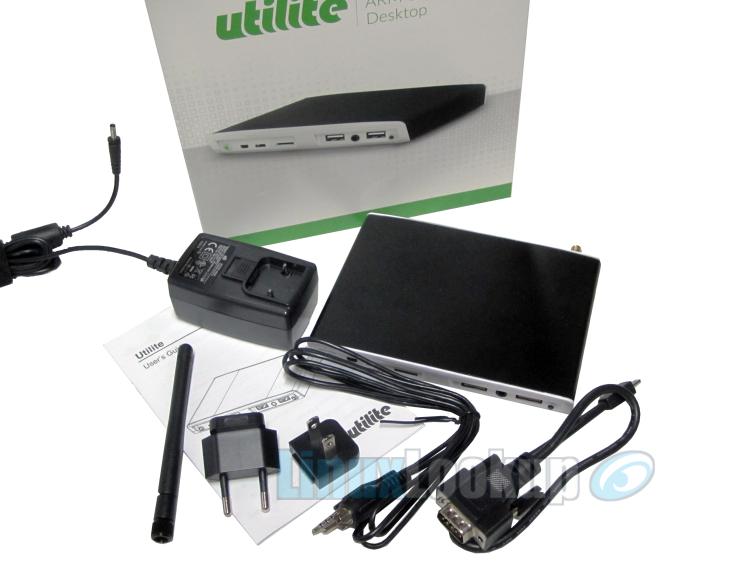 Contents of the Utilite Pro retail box has everything you need to get started. One computer, WiFi antenna, mini-serial to DB-9 male adapter, 3.5mm to RCA cable, users manual, power adapter with both North-American and European plugs. 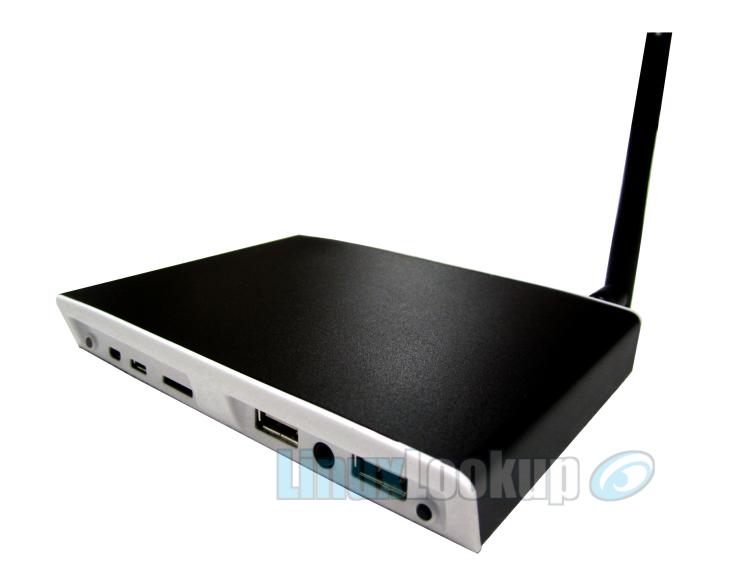 CompuLab has been making embedded computers for over 17 years and prides themselves on long term availability of electronic components, RoHS compliance and high build quality. Examining the Utilite Pro housing we see the upper-half (black) is constructed from pressed metal and lower-half (white) is formed plastic. Overall measurements are 5.3" x 3.9" x 0.8" which is an impressively small foot print ideal for installations where physical space is limited or requires portability. 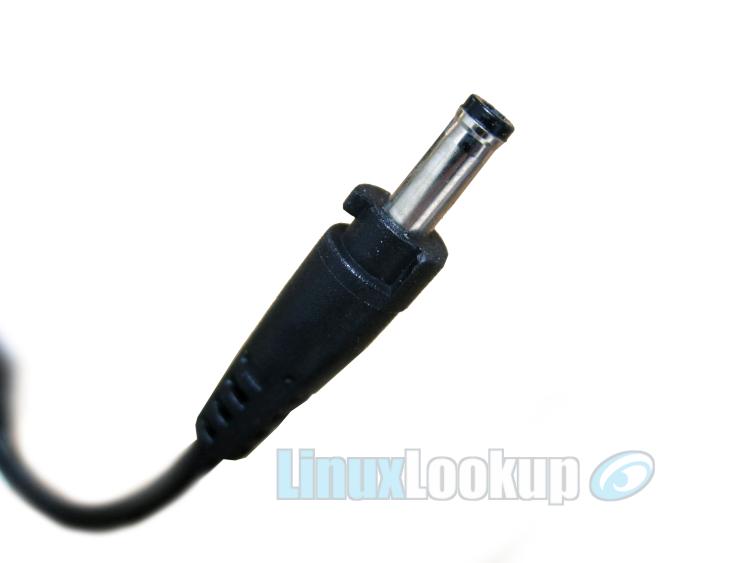 One thing I dislike is when manufactures use propitiatory components and connectors. Such is the case with this included external power adapter. As shown in this photo, a notched output connector is used. This makes things difficult if you're ever looking for a quick replacement. Proprietary bad, universal good!

You can hook up a mouse and/or keyboard via USB or Bluetooth to navigate. In my evaluation I used both USB peripherals and a generic Bluetooth combo which had no problems pairing.

Ubuntu Linux for Utilite and Android for Utilite are both developed and maintained by the CompuLab software team. All three models in the Utilite product lineup support your choice of either full-featured Operating System.

Being a Linux oriented site, I of course chose to focus my time and efforts on their Linux installation running Ubuntu Desktop 12.04.3 LTS with custom Linux Kernel version 3.0.35-cm-fx6-5.2 (armv7l). 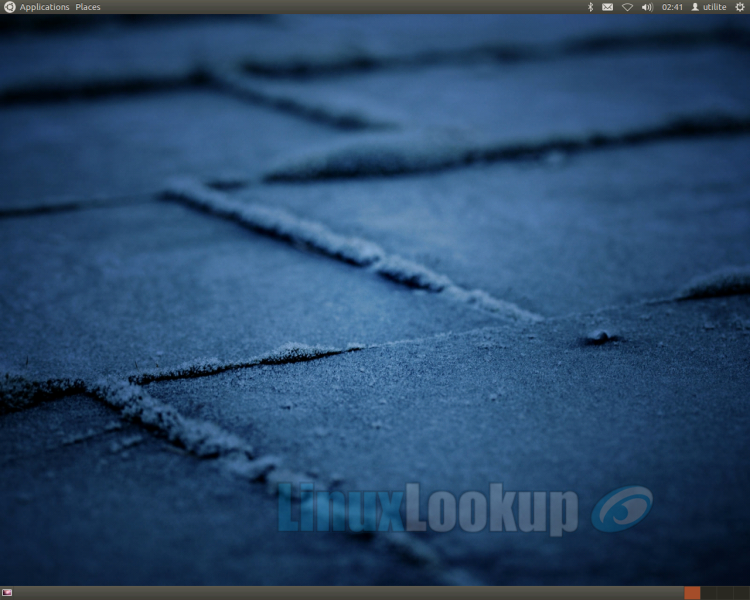 The system I received had over 130 pending packages (124.4MB), so the first thing you'll want to do on first boot is run Ubuntu package manager. Taking a closer look at the Operating System, it's just your typical Ubuntu Desktop with default software packages installed. Everything was intact and worked as expected. Since this review is about the device and not Ubuntu, there isn't much else for me to elaborate on. Though now I'm on the topic, perhaps I should make a statement regarding future updates and development. I've always been reluctant to depend on a single third party for software updates, as in my experience, the updates stop when interest in the product is lost or a new model comes out. Not saying this is the case with CompuLab, but potential is there. Eventually CompuLab will stop supporting updates for this product or move onto Ubuntu 14.04 Long Term Support (LTS) which scheduled for third quarter 2014 release. This will be a good indication as to where CompuLab stands on longevity of the product.

Utilite is marketed as platform for industrial and outdoor installations with extended operating temperature ranges of commercial: 0C – 45C and extended: -20C – 60C. I did not expose the Utilite Pro to any extreme conditions so we'll have to take their word for it on this one.

It should be noted that under regular room temperatures I've found the unit warm to the touch. Though this is expected because there are no fans for cooling, it'll be interesting to see if this effects life-span of the unit.

Speaking of fan-less design. This device runs silent and if it wasn't for the LED indicators, you wouldn't even know the computer was on (green LED) or off (amber LED).

System boot time are consistently 20 seconds from cold boot to fully-functional desktop. You'll want to make sure all your peripherals and cables are attached prior to plugging the AC adapter into a power source as the device will boot soon as power is connected.

In the case of Utilite Pro, installation of the Linux Operating System is on a SanDisk U100 32GB Solid State Drive utilizing ext4 filesystem type. Default directory structure leaves you with a root partition of 26GB available free space.

I played around with Gnome Desktop, some applications installed in LTS, default connectivity along with general responsiveness. Everything checked out and no issues were present.

Video playback is what interested me the most. I spent majority of my time with different resolutions of 1080p, 720p and 480p in MKV format all played fine off both local Solid State Drive and connected USB 2.0 external disk drive with no lag. Fast forward to any point in the 9GB video file yielded no negative effects on performance and was instant. During such time I was monitoring system processes and the load average was reasonable. 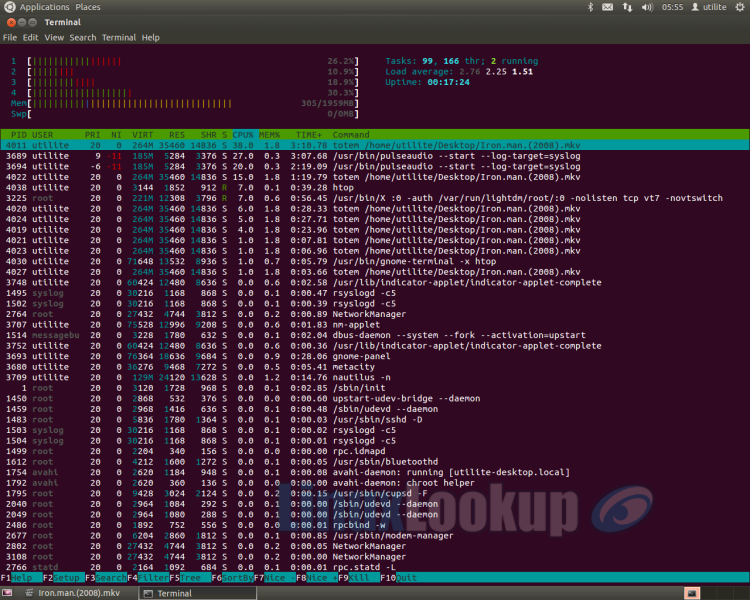 Our energy efficiency test measured power consumption under load fluctuating between 7.2W to 8.1W and idle fluctuation at 7.2W to 7.8W. Your results may very depending on system load. 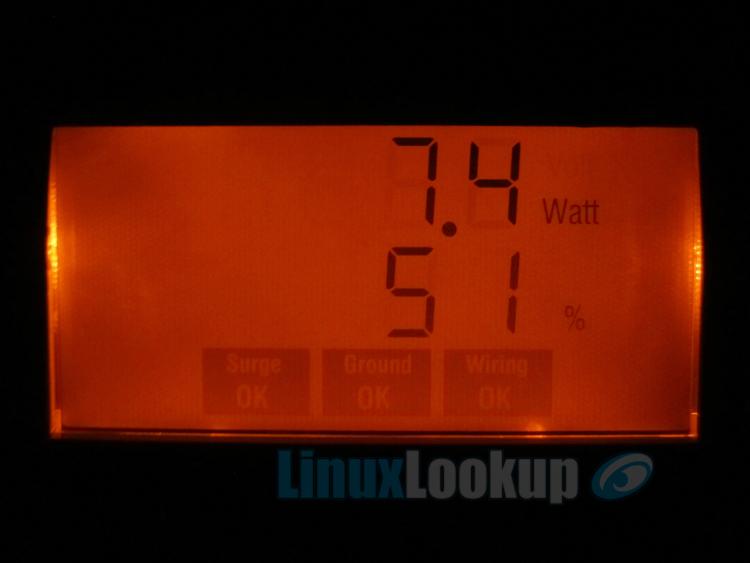 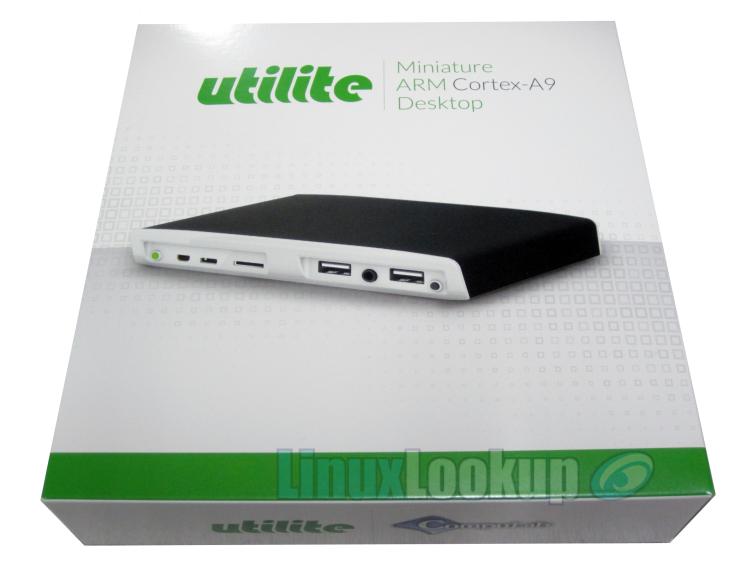 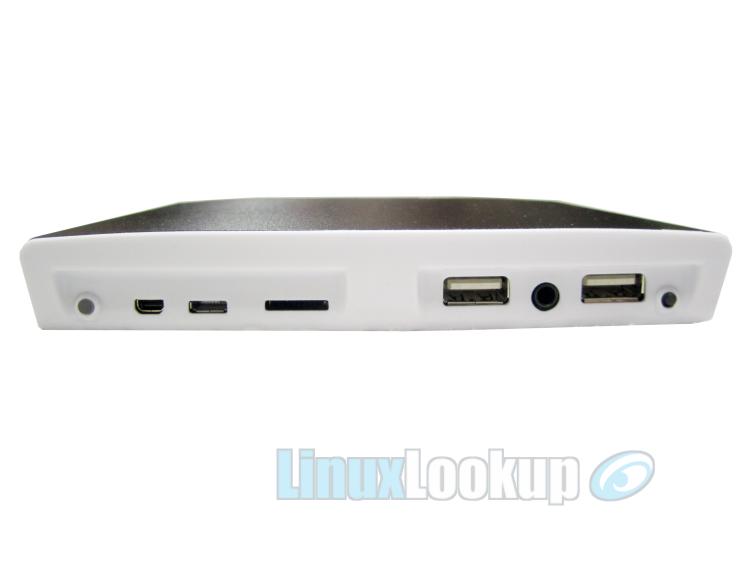 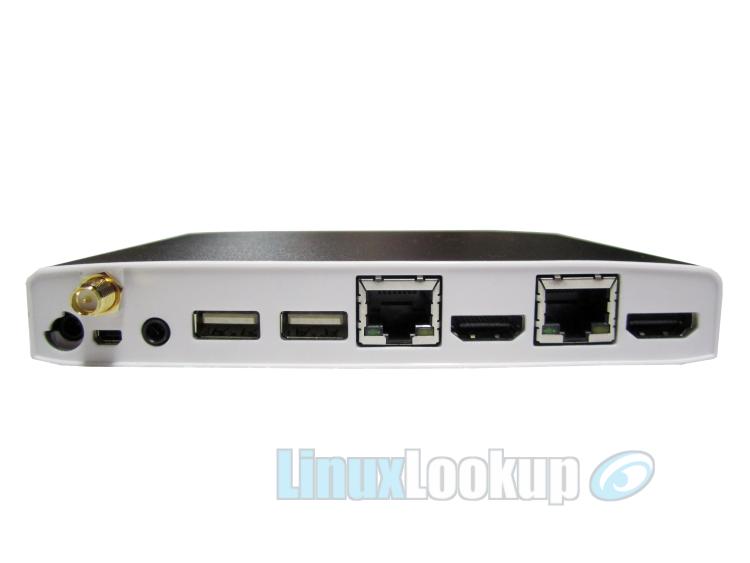 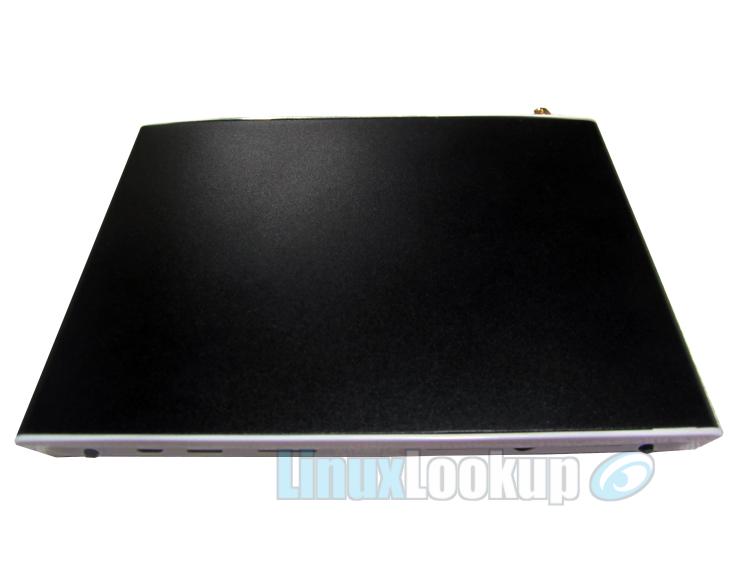 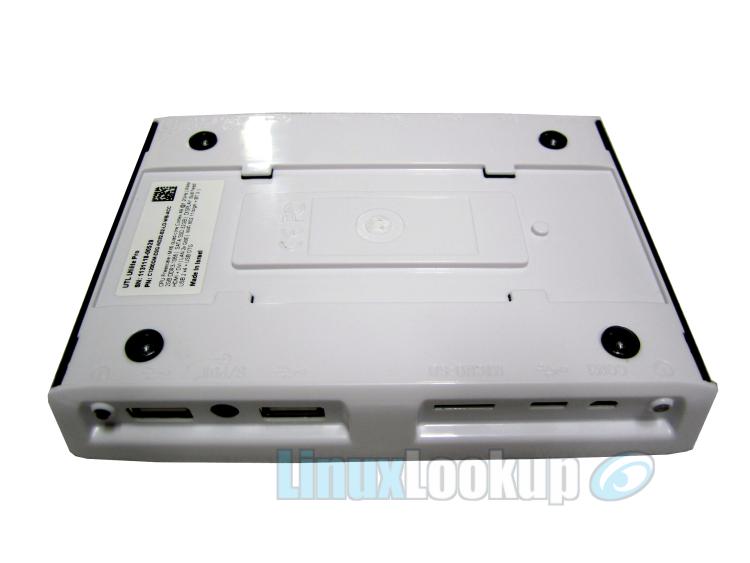 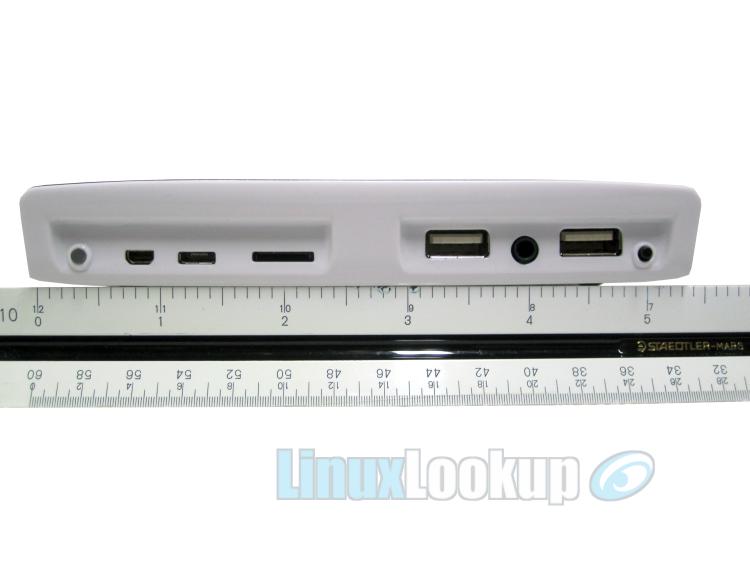 Despite it's size, make no mistakes, the CompuLab Utilite Pro is absolutely a fully functional Linux Desktop computer. Requiring no time or dedication to set up, Utilite works straight out of the box running Ubuntu Linux and proves that price isn't always indicative of performance.

Considering the reasonable price, I'd highly recommend this product to anyone looking for an inexpensive dedicated Linux Desktop computer.